<![endif]-->
Advanced Search
Experts Agreed On The Fact That Fake News And Rumors Out-speed The Efforts Of Refutation
Category: Kuwait 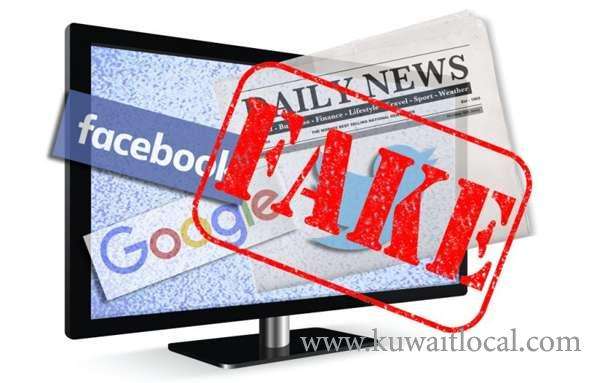 As government, on a serious note against fake news and rumors, embarked on a campaign recently, especially in the social communication network platforms, the opinions of experts in this aspect agreed on the fact that fake news and rumors out-speed the efforts of refutation, reports Al-Qabas daily.

In her role, lecturer at Kuwait University Dr Malak Al-Rashid affirmed that lack of transparency on the side of the official media outlet and government institutions when it comes to receiving information and factual news contributes in spreading rumors.

Dr Al-Rashid urged the official bodies to deal quickly with information that gets published, even if official response usually lacks adequate information, adding that rumors still continue to spread due to lack of direct communication between the public and the government bodies despite laws regulating ways of handling news. “This lack of direct communication, in addition to lack of transparency in providing information creates the urge to search for information in any other outlet that spreads information to stir tension. Therefore, there is a need to close the vacuum of information through accurate government bodies”, she noted.

Another Kuwait University lecturer, Dr Amthal Al-Huweila spoke about information psychology, indicating psychological pressure makes people prone to spreading rumors and believing in them. Dr Al-Huweila pointed out that social communication media platforms have made the spread of rumors easier, as well as easy access to information through smart phones, which make people talk about every specialization as if everyone is become expert in whatever information or news trending.

Al-Huweila urged on spreading the culture that discourages spreading of news or information without verification, which she stressed should start in the family. She also stated the importance of enhancing and activating the role of official spokesperson for the government to shut doors on rumors the information media even helps in spreading.

“Due to guaranteed freedom of speech and opinion in Kuwait, nothing deters the spread of newseven before verification- whether such news is appropriate or it infringes personal rights or integrity of any given institution”, he noted, adding the speed at which information spreads in a short time has significantly increased, which means rumors would spread faster.