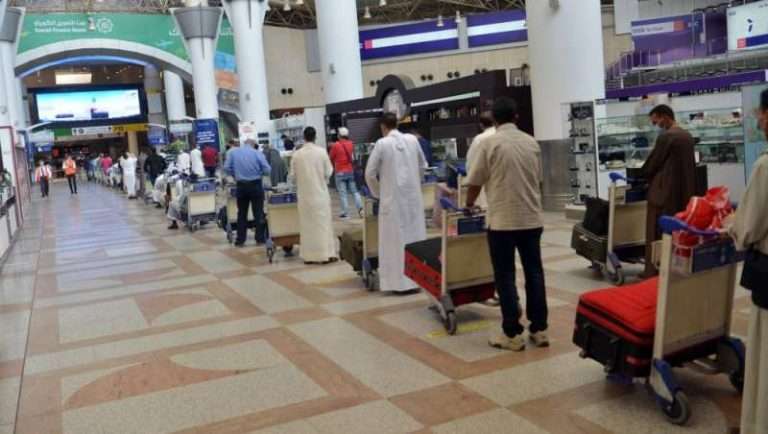 The decision to close Kuwait Airport and to stop flights was implemented more than a year ago and later in February a decision was taken to prevent expats from entering the country. This decision is still in force and has led to many humanitarian problems such as the separation of families.

Between the longing for parents and children, and the fear of losing a source of livelihood, many expatriates in Kuwait fell victim to the Coronavirus health crisis and its consequences, Al-Rai daily reported.

Many government agencies announced their inability to give their employees any guarantees to return because the matter is outside their authority and depends on the assessment of the health authorities.

Many residents live in a state of anxiety and confusion as if they return to their country the way to return to Kuwait is not open yet. For others, the return route is not safe with an increasing number of cases and the arrival of the Delta virus in Kuwait.

With the end of the school year, 30,000 teachers are ready to receive the Exit for the summer vacation period. After complete closure in 2020, thousands of arrivals were prevented from traveling to their countries.

The dilemma of Expat Teachers

The issue of those stranded abroad opened the door wide to thorny family issues in Kuwait with the start of the summer vacation for many professions, foremost of which are educational jobs for about 30,000 expatriate teachers in the government educational sector.

The daily surveyed the opinions of the expatriate teachers about their position on traveling or staying in Kuwait for the second year in a row. The Egyptian teacher, Nashwa Qassem, said that she is stuck between the longing for her children in Egypt and the fear of losing her source of livelihood as she is the breadwinner after the death of their father.

She added, “I also have a court session regarding a property dispute over my house there, and I’m afraid of losing it if I don’t attend and I don’t know what to do?”

A Syrian teacher Ibrahim Saud said that the fear of being stranded abroad must be resolved quickly, given their humanitarian and social repercussions.

Mathematics teacher Sami Omar said, “The lack of clarity regarding the date of opening the airport and resuming flights with many countries is of great concern to me and my fellow teachers.”

Omar explained that the school management in which he works does not mind granting us exits, but it does not guarantee our return.

Abdullah Ahmed said that he and his teacher friends do not know when they can travel without fear that their jobs will be terminated if they are unable to return.

Medical workers have not shied away from the concerns of traveling and preventing the entry of expatriates, although medical professionals, whether in the government or private sector, can travel and return, the concerns, as expressed by Dr. Ahmed Alaa El-Din, are related to whether the exclusion decision includes Doctors’ families, or do they fall under the framework of preventing the entry of expatriates.

Dr. Ahmed Hosni, who works in a private hospital, said that he received two doses of vaccination 4 months ago, but he has not been able to travel to see his children for a year and a half due to the closure of the airport, stressing that he is afraid to travel and can only return except for an emergency committee. Corona.

Residents working as managers in private sector companies criticized the marginalization of expatriates, and the failure to consider their situation.

When making decisions to ease measures related to confronting the Coronavirus, noting that they live the situation as citizens live, and received the vaccine and became immunized, why not allow them to travel and return as citizens?

Resident Ahmed Mahmoud, who works as a manager of a private company, said that the decision not to allow the resident to travel and return, and to prevent the expatriates from entering Kuwait is unfair

Nidal Atish, director of a tourism company said that the delay in setting up a mechanism for the return of expatriates will confuse the workflow in the public and private sectors, and Kuwait may lose 40 percent of the trained workers, on which a lot of money was spent to reach its current efficiency.