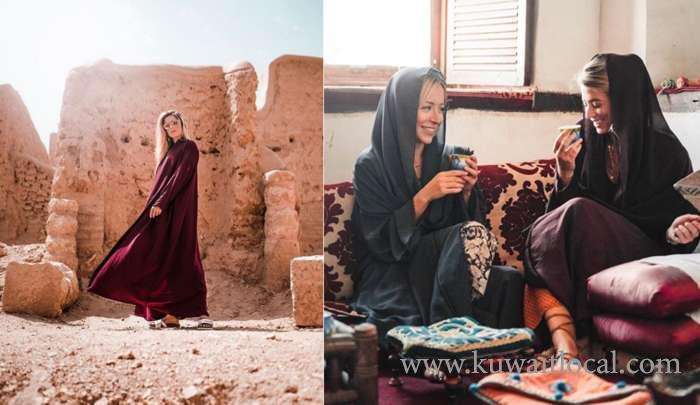 Saudi Arabia just hit "two birds with one stone" after announcing that tourists from 49 countries will be able to visit the kingdom soon, and that female travelers won't need to wear the once-mandatory abaya when roaming the streets.

This comes as part of a new visa program that has been in the making for quite some time, which aims at transforming Saudi Arabia into a tourism hotspot. The Saudi Commission for Tourism and National Heritage (SCTH) made the announcement recently at an event in Ad-Diriyah, an ancient touristic city in the kingdom. Jumpstarting the tourism sector is one of the key goals under Crown Prince Mohammed bin Salman's Vision 2030 which aims at reducing the country's reliance on oil.

Al-Khateeb also said the kingdom's recognized strict dress code will no longer require foreign women to wear the abaya. However, Saudi nationals will still be required to do so when out in public.

Saudi Arabia enforces a strict dress code, obliging women to wear abayas - aka full-length garments - in public spaces. Several women have been arrested for appearing in public without the abaya. With regard to female tourists, they will still have to wear "modest clothing" even when headed to public beaches, however, did not elaborate further on the matter.

Women travelers will also have no restrictions when applying for a visa without an "unaccompanied male." Visas will roll out online, costing about $80 per application. Access to holy Islamic sites will remain off-limits to tourists in general.

More details on which countries are eligible are expected to be announced soon, but Al-Khateeb said China, Japan, Europe, and the United States were among the targets.

Traveling to Saudi Arabia was previously restricted to business-related purposes or religious ones. But one of the key goals under Vision 2030 is to increase the number of tourists who visit Saudi Arabia and revenues generated from the sector to 18 percent in the next 14 years. Under the same scheme, Saudi Arabia is expected to host up to 1.5 million tourists by 2020. It's true that much of that number comes from religious tourism, but that doesn't mean effort hasn't been put into the growth of the leisure tourism sector.

In fact, the kingdom has been slowly inviting tourists to enjoy the many activities, summer festivals, sporting events, and concerts that it's been hosting. At the end of last year, the kingdom announced it will begin offering electronic visas for foreign visitors who wish to attend sporting events and concerts. In December, the kingdom launched the visa service for visitors for the motoring event Formula E and saw 1,000 tourists from 80 countries land in the kingdom.

This summer, Saudi Arabia did the same thing when the Jeddah Season festival began. All attendees from abroad were granted a visa online upon purchasing an event ticket.

Such events have seen women join in on the fun as non-gender segregated events become more accepted in the kingdom. However, there are still various laws that must be met to avoid trouble in that arena.

What about Saudi women? Will "abaya" always be mandatory?

Women in Saudi Arabia, both nationals and foreigners, have been obliged to wear the floor-length garments in public for decades. But, the most recent decision presents a more positive outlook as to where things may be headed. That rings true for foreigners, but what about locals?

There has, in fact, been a shift in attitude toward the conservative attire in recent years, with several clerics speaking up against forcing it on women. This month, Saudi Islamic scholar Ahmed bin Qasim Al Ghamdi expressed his views on the matter.

"I don't see why a woman should be forced to wear an abaya in public. If she wears something that covers her body and hair, it's permissible regardless of the color or model of her clothes," he said during a televised appearance on Rotana Khalijiya's program Etijahat.

Saudi Arabia's Crown Prince MBS and the kingdom's top cleric previously spoke against the mandatory abaya as well. Time will tell whether women in the kingdom will be free to make their own dress choices or not.