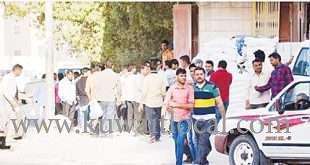 The government has issued a decree to reduce the number of expatriates in all government departments by the next fiscal 2019/2020, which will start on April 1, reports Annahar daily.

According to a resolution issued by the Council of Ministers last weekend it will prevent any exception to this resolution as the government seeks to raise the rate of recruitment (localization of posts) in ministries and government institutions to more than 90 percent by the end of next fiscal year.

The daily quoting reliable sources said the increasing need of the outputs of national education for government jobs necessitated the restructuring of employment in the public sector for the resettlement of jobs within the framework of a government plan established in 2017 aimed at reducing the number of foreign workers in ministries and government institutions to make way and reduce unemployment among citizens through the introduction of jobs in different locations of the state according to a gradual program.

The sources said that this plan — the resettlement of government jobs — will be followed by a plan to reduce employment in the government sector in order to transfer jobs to the private sector gradually through the system of partnership in projects between the two sectors and expand the private sector to contribute to the economy to reduce the burden of the state budget.

The labor market annually provides about 25,000 Kuwaiti graduates which requires the state to develop medium and long term solutions to accommodate all citizens into the labor market by creating greater job opportunities in state institutions as well as in the private sector where the government plans to abandon compulsory government decisions that do not take structural considerations into account in the labor market, in favor of a policy based on motivation. This policy can include support and fees to achieve the desired objectives.

According to the latest data issued by the Central Bureau of Statistics, the number of Kuwaiti employees until the end of December 2018 was about 360,000, representing more than 71 percent of the total employees.

The data and statistics show that the average salary of the expatriate in the government, was KD 1,500 per month, and allocated 13 billion dinars for the salaries and compensation of employees in the budget for the next fiscal year 2019/2020, an increase of 5 percent from the previous budget, which amounted to KD 11.2 billion in allocations for salaries.