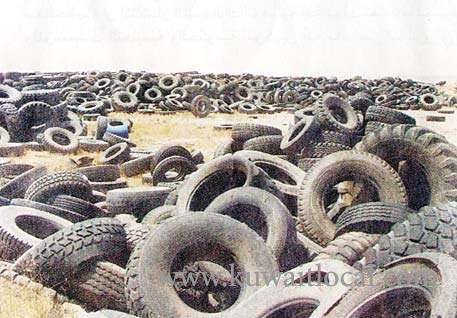 The Director-General of the General Authority for Environment and Chairman of the Board of Directors Sheikh Abdullah Al-Ahmad said that the Authority received the site from PAI to complete the removal of tires, and thanked the ministry for its efforts during the previous years.

“The tires will be purged and handed over to the Public Authority for Housing Welfare within a period not exceeding one year.

These tires will be transferred to factories that use them in certain industries, or they will be used in Kuwait Cement Company to convert it to energy,” he said.

Regarding the number of existing tires that the Authority will recycle, he said, “Today, it ranges from 20 to 40 million tires, and we will be able to deal with them all within a period of not more than a year, and there are initiators who want to deal with these tires.”

He concluded by saying: “We will cooperate with the Kuwait Municipality and the Public Authority for Industry, to finish the landfill of the tire in a quick period, and delivered.”

Al-Saadi’s lawyer told the prosecutor that he had received a call from the suspect who asked to meet him and during the meeting she told him that she was being threatened (which he later the story was not true) and asked him to represent her.

The next morning he was surprised to see threatening statements against him in her Twitter account, and was shocked to learn she had broken into his office at noon when no one was around taking advantage of the situation because at that time everyone leaves their offices for a break.