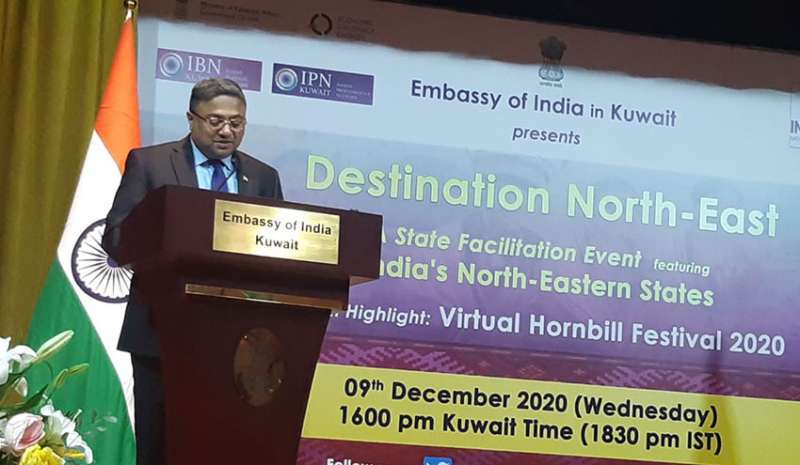 The Indian Embassy in Kuwait as part of its series of events to promote Indian states for investment organized an event featuring India’s North East States with special highlight on ‘Virtual Hornbill Festival 2020’.

Addressing the event, the Indian Ambassador to Kuwait, HE Sibi George, said States of North East are central to two of the fundamental pillars of Government of India’s policies – Neighborhood First and Act East. A powerhouse of talent, be it in the traditional handicrafts to the cutting edge fields in the services sector, the young men and women from the states of the North East have and are continuing to make their mark across the world, he said.

North Eastern States of India are not only known for their natural beauty but are also the growth engine of the future for India, Ambassador said.

“I have a personal connect with the North East. I began my career in Meghalaya as Assistant Commissioner of the District of Shillong. It is there that I spent considerable time learning about State administration,” the Indian envoy added. His first best friend in Foreign Service, the ambassador said, was from Nagaland, Himato Zhimomi, who joined the virtual conference from Kohima. He told the audience, growth and prosperity of North East of India is key to building a Self-Reliant India.

The event was attended by number of businessmen from Kuwait. Prominent speakers and official representatives give a detailed presentation on various states and its facilities. Some of the speakers includes Shri I. Himato Zhimomi - Principal Secretary from Nagaland and Dr S Anbalagan, CEO Sikkim Organic farming Development Agency. the speakers delivered detailed presentations covering various aspects of the region, the latest economic developments, overview of various industries, state of business environment and ease of doing business, latest initiatives offered and potential opportunities for further enhancement of trade and investments linkages.

To unlock the potential of the region and ignite the entrepreneurial spirit, the government of India, through its “Act East, Act Fast” policy has put in place an effective mechanism for accelerated development. Be it the cluster-based approach for development of agroindustrial hubs, organic farming or development of the immense tourism potential through connectivity projects or the massive investments in building social and physical infrastructure in the region, sustained efforts are being made by the government to increase the growth and development of the region, the ambassador added.

The special highlight of the event was the virtual presentation of Hornbill festival, which is a popular event in Nagaland.