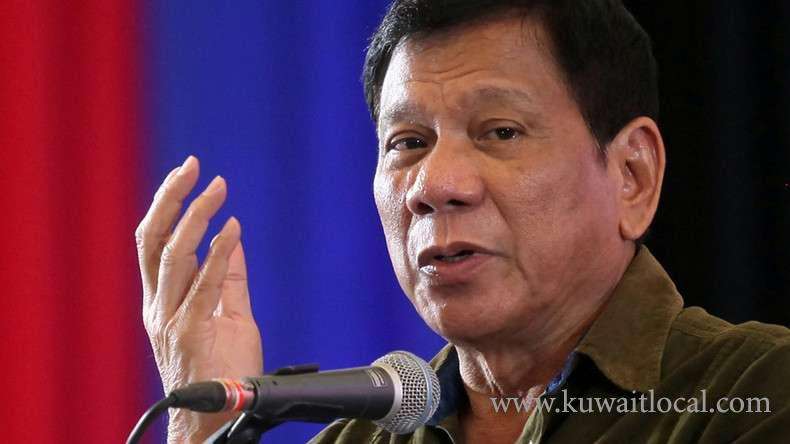 The Philippines President Rodrigo Duterte was quoted as saying he has incorporated what he called “mandatory provisions” in the final draft of the bilateral agreement between the Philippines and Kuwait which is expected to be signed in the first week of April — the venue of which has yet to be determined — to ensure the protection of Overseas Filipino Workers (OFWs) in Kuwait, according to sunstar.com.ph.

This came while he was addressing the graduates of the Philippine National Police Academy’s (PNPA) Maragtas Class of 2018 in Silang, Cavite. He explained he was late for the commencement of the exercises because he had to set some conditions for the Kuwaiti government, to uphold the rights of OFWs which Labor Secretary Silvestre Bello III will take to Kuwait.

The outspoken president said he had instructed Bello III to strongly stress that the OFWs in Kuwait must be treated equally by their employers inserting provisions that would be beneficial for his countrymen. “For example, I demanded that it will be a contract — government-to government — and that there will be some mandatory provisions like they should be allowed to sleep at least seven hours a day that they should be fed nutritious food. And we will not allow leftovers to be eaten by our countrymen. Let them cook their own meal,” Duterte said.
;

Other major proposed provisions include the binding effect of the Philippine- crafted employment contract and the guaranteed payment of minimum monthly net pay of $400 paid through the bank, and non-confiscation of mobile phones and other communication gadgets.

“Then there will be no confiscation of passports by employers. If at all, it will be surrendered on the tables or on the arrivals of any countries where the Filipinos are working in numbers. And fifth is that they should be allowed holidays and everything,” he added.

The impending signing of bilateral pact came amid the reported maltreatment against and deaths of Filipino workers in Kuwait. The persistent abuses of Kuwaiti employers against OFWs prompted Duterte to announce a total deployment ban in the Gulf nation.

Duterte said he will not allow any foreign employers to look at his Filipinos as “slaves. I do not mean to offend all who are employing Filipinos abroad. I said that we are not slaves,” he added.
;

Bello said the talks were a success, but added the signing of the deal would not mean automatic lifting of the deployment ban, according to Inquirer News.

The formal talks were concluded last Friday night between a delegation of Kuwaiti officials and their Philippine counterparts.

However, the abs-cbn news quoting Bello said, the lifting of the deployment ban will cover only the skilled workers. The deployment ban for domestic workers, however, is unlikely to be lifted anytime soon. “I will be prepared to recommend lifting of the total ban with respect to the skilled workers but not the household service workers,” Bello told lawmakers during a hearing of the House Committee on Overseas Workers Affairs.

The Philippines last month repatriated hundreds of Filipino workers from Kuwait and imposed a ban on the deployment of workers to the Gulf state, prompted by reported deaths of Filipino domestic workers there, including that of Iloilo native Joanna Demafelis.

The murder of 29-year-old Demafelis, whose body was found in a freezer in an abandoned apartment in February, prompted Duterte to declare the ban. How Kuwait will deal with the investigation of Demafelis’ murder case will be Manila’s basis for the Gulf state’s sincerity in pursuing the deal on the protection of migrant workers, Bello added.