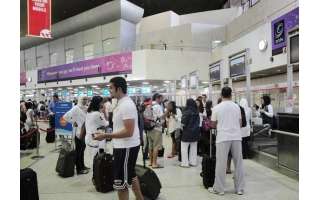 There are about 15 flights daily from Kuwait to Dubai and seven to Istanbul, Ahmad Farhat, a travel agent, said, adding that travellers usually chose a destination that has the best flight offers.

Arab infatuation with Istanbul has been steadily increasing after several Turkish dramas were broadcast in the region. The shows feature characters with Arabic names and the actors speak an Arabic dialect instead of the unrealistic literary Arabic — and focus on themes that are close to the hearts of Arab families.

The shows have become a phenomenon in the Arab world with millions of young and old people avidly following them. Most of the series are filmed in Istanbul and so the city has become a popular tourist destination for Arabs looking for “familiar” settings and landscapes.

Ahmad Abdul Sattar, the head of a travel agency, said that Beirut was the third most popular destination for Kuwaitis, and that tourists from GCC also preferred to head to the Egyptian resort of Sharm Al Shaikh to enjoy the low prices offered on hotels there.

The number of Kuwaitis planning to visit Europe is not high, due to the extremely cold weather and the short length of the holidays, he added. The travel agent also noted that ticket prices were not yet reflecting the drop in oil prices, while competition between travel agencies to attract tourists was keeping prices reasonable during the holiday season.

However, several Kuwaiti citizens said they preferred spending the holiday in Kuwait to enjoy its cold weather and the wide range of offers on renting chalets and camps, Kuna reported. “Chalets in the Kuwaiti countryside provide various types of entertainment for families, including marine and land activities such as fishing and biking,” Gazi Al Shammari, a Kuwaiti national, said.