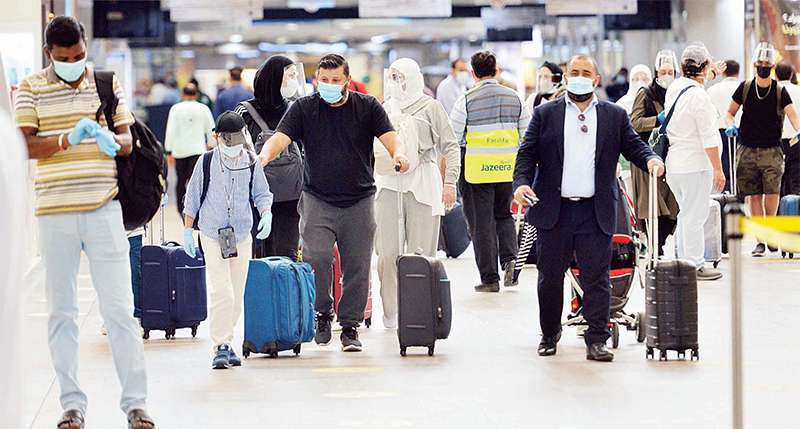 Following the decision taken by the Directorate General of Civil Aviation (DGCA) to ban entry into Kuwait for citizens from 34 countries, irrespective of whether they came directly or via transit, without staying for 14 days in any of the non-prohibited countries, Dubai became the ideal choice for thousands of residents wishing to return to Kuwait. This led to a hike in the costs of tickets to about 14 times the usual amount. It has in turn negatively affected the plans of Kuwaiti citizens who wish to travel to Dubai for holidays as there are insufficient seats available to return and due to the increased ticket costs, reports Al-Qabas daily.

Perhaps what made Dubai the most popular among the Kuwaiti residents to be their stop  for spending the required quarantine period is that travel and tourism companies have been offering travel packages at limited prices, including trips from their countries to Dubai, and then to Kuwait after staying for 14 days in its hotels. This encouraged thousands of residents and their families to take advantage of this opportunity.

The countries from which citizens are allowed to enter Kuwait have benefited from the health authorities ’decision to prevent entry for those coming from 34 countries into Kuwait. It has lost a great opportunity to revitalize the economy by allowing institutional quarantine for residents coming to the country for a period of 14 days, instead of activating the economy of other countries.

In this regard, a member of the Union of Tourism and Travel Offices Abdul Rahman Al-Kharafi affirmed that this decision did not take the economic aspects into consideration, which resulted in heavy losses for many sectors, the most important of which are travel, hotels and transportation.

He indicated that it was possible to make the return of residents easier for them and open the door for institutional quarantine in the hotels of Kuwait, instead of activating the economy of countries, which have become a haven for the return of Kuwaiti residents.

Al-Kharafi said, if Kuwait had opened its hotels for institutional quarantine, this feature would have served as a gateway to revitalize the economy in ten different sectors including travel, hotels, transportation, food and others.

Regarding reasons for the increase in the ticket costs from Dubai to Kuwait, Al-Kharafi said, “According to indicators and statistics, the number of residents outside the country who want to return is estimated at 160,000; all of them are from the 34 prohibited countries. Many of them opted to choose Dubai as the transit station for returning to Kuwait due to the low hotel prices and the ease of procedures.”

He affirmed that the health authorities’ decision led to the astronomical increase in the cost of air tickets for those heading to Kuwait from KD 80 for a two-way trip to KD 700 for just a one-way trip to Kuwait.

Al-Kharafi indicated that the ban was implemented without conducting an adequate study, adding that, “The high cost of return tickets from Dubai is due to several reasons such as the density of Kuwaiti residents in Dubai who wish to return to the country, limited travel seats, and lack of daily flights between Kuwait and Dubai, which is currently four flights per day”.

He believed that, “The number of flights between Dubai and Kuwait was supposed to increase in order to reduce the price of air tickets, as the lower the supply and the greater the demand, the higher the prices. This is a legitimate right for airlines as compensation for the heavy losses they suffered as a result of the COVID-19 crisis. Considering the number of Kuwaiti residents present in Dubai, several months are needed in order for them to get a seat to return to Kuwait, in light of the current conditions.”

Al-Kharafi highlighted that, “Residents returning through Dubai have been subjected to many cases of fraud by some travel companies that provided them with ways to return from their countries to Dubai, but were unable to provide travel tickets to Kuwait due to the lack of flights”.

He indicated that, “All reservations are closed until mid-November, and there is no choice but to increase the operating capacity of flights between the two terminals”.

Al-Kharafi explained that the citizens who are most affected by the crisis of increased ticket costs are those who will not be able to travel to Dubai during the holidays due to the fact that the return trip to the country is very expensive. It has reached a price level that was never seen even for faraway countries, such as the United States of America and Canada.

He called on DGCA to allocate a “quota” for citizens on every flight coming from Dubai to Kuwait.