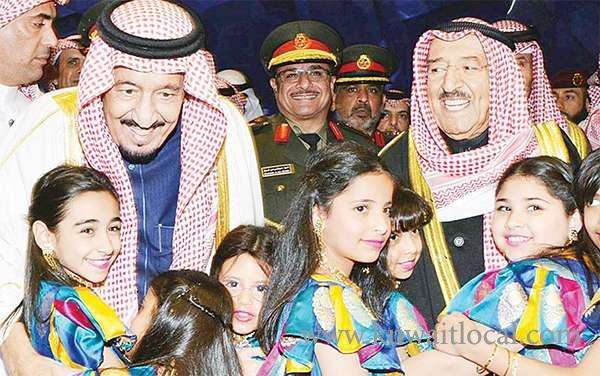 Deputy Prime Minister and Interior Minister Sheikh Mohammad Al-Khaled Al-Sabah on Friday expressed deep satisfaction with the current historic visit to the country by the Custodian of the Two Holy Mosques, King Salman Bin Abdulaziz Al-Saud of the brotherly Kingdom of Saudi Arabia.

This visit signals the solid and deeply-rooted relations between the State of Kuwait and the Kingdom of Saudi Arabia, said Sheikh Mohammad, also the head of the accompanying mission of honor, in a statement. Peoples of the two brotherly countries look forward to this visit with respect of its impact on regional states’ development and prosperity, he said, noting the Kingdom’s solid stance on Kuwait’s side during the 1990 Iraqi aggression and its warm hosting of Kuwaiti citizens at these hard times.

The Kingdom of Saudi Arabia constitutes “the strategic depth and the solid shield in facing dangers and challenges,” he said, affirming the vital Saudi support for the State of Kuwait.

In conclusion, he indicated at the high-esteem status of the Kingdom in eyes of the Arab peoples, noting the resolve of King Salman and His Highness the Amir Sheikh Sabah Al-Ahmad Al- Jaber Al-Sabah for maintaining security, stability and welfare in the Arab world. King Salman, accompanied by a broad delegation of senior officials, arrived in Kuwait on Thursday, starting a historic visit to the country, where he held talks with His Highness the Amir.

He arrived to an elaborate red-carpet welcome and ceremonial arrangements, displaying military personnel, with tune of the two countries’ National Anthems. Kuwait and Saudi Arabia are member states of the Gulf Cooperation Council (GCC), established in the early ’80s in the shadow of a regional war between Iran and Iraq. The bloc was set up for closer links and cooperation at diverse levels among its six member countries — including Oman, the UAE, Qatar and Bahrain.