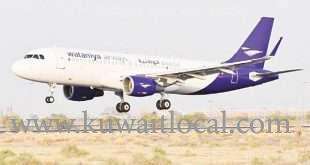 His Highness the Deputy Amir and Crown Prince Sheikh Nawaf Al-Ahmad Al-Jaber Al-Sabah instructed government Saturday to bring back all citizens whose flights on Wataniya Airways were cancelled, the minister said.

Jenan Boushehri, Minister of State for Housing and Minister of State for Services, said His Highness the Prime Minister Sheikh Jaber Mubarak Al-Hamad Al-Sabah instructed coordination between the Foreign Ministry and the Directorate General of Civil Aviation (DGCA) to facilitate return of citizens back to Kuwait. She said in a statement citizens whose flights on Wataniya Airways could contact consulates or embassies through the given telephone numbers.

The DGCA earlier addressed an ultimatum to Wataniya Airways to resolve problems such as recurring flights’ delay and cancellation.

The DGCA warned in case the company failed to fulfil its duties properly, its permit would be suspended, effective September 6 for three months as an initial penalty, while compelling it to fulfil its financial and legal liabilities toward passengers.

If Wataniya Airways fails again to tackle these problems, it will be stripped of the license permanently. The directorate said several warnings had been given to the company to no avail.

It assured passengers that it would do its best to ensure their safety and rights, vowing to follow up on Wataniya’s commitment to secure their comeback either on its aircraft or planes of other companies.

Meanwhile, Kuwait Airways announced Sunday that they will operate a charter airplane to carry out passengers who had their return home flights canceled by other airlines.

Kuwait Airways announced on Twitter that the flight will operate upon the request of the Kuwaiti government in cooperation with the Directorate General of Civil Aviation (DGCA), and to contact the Kuwait consulate about that matter.