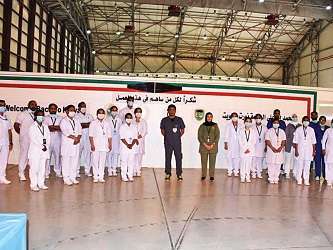 From well-informed sources at the Medical Services Authority at the Ministry of Defense that the medical staff at the Julai’a Quarry, which the Ministry supervises, has begun receiving 142 recoveries from the Corona virus, to donate blood plasma in cooperation and coordination with the Ministry of Health.

The source added that all recovered patients from the Asian labor force, who received treatment in government hospitals after they contracted the disease, pointing out that the process of donating blood plasma from the explorers is carried out under the supervision of a medical staff specialized in blood transfusions, explaining that all blood plasma plates will be transferred to The competent authorities in the Ministry of Health for use in research and treatment of injured people.

He stressed that all donors have undergone tests for this type of donation, noting that a number of them have been excluded after tests have proven that they have some diseases.

On the other hand, and under the directions of the Deputy Prime Minister and Minister of Defense Sheikh Ahmed Al-Mansour, the Ministry has established a special medical examination center for the new Corona virus at the Abdullah Al-Mubarak Air Base, for citizens coming from abroad, to conduct the necessary medical examinations in accordance with the standards recommended by the World Health Organization .

The Commander of the Inspection Center, Colonel Staff Doctor Khaled Al-Balushi, stated that the idea of ​​establishing the center is to support and assign the Ministry of Health to examine citizens coming from abroad, whether military or civilian, where the procedures go through several stages starting with the first stage, which is the screening stage, and separating those who show symptoms The virus is about the symptoms of healthy people, the second stage is the data entry stage, and the third stage is the examination phase by taking a swab from them, and then the last stage which is the evacuation stage, where those who appear symptoms go to the institutional stone, and those who did not show symptoms for the home stone.

In turn, the Assistant Director of Services Affairs in the Military Facilities Engineering Col. Walid Al-Morished reported that the medical examination center was established in accordance with the medical requirements, which were set by the Ministry of Health, where the aircraft repair building at the base was used to implement the special medical examination building for the new Corona virus by The services department in the military installations engineering sector, within 42 working hours, with an area of ​​1050 square meters, as a team of civilian engineers in the military installations engineering sector contributed to this work.