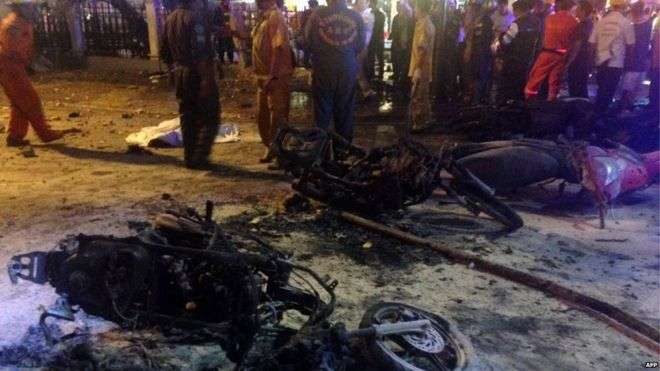 A bomb has exploded close to a shrine in the centre of the Thai capital, Bangkok, police say.

Local reports suggest at least 12 people have died and dozens have been injured.

The BBC's Jonathan Head, who is at the scene, says there is a huge amount of chaos, with body parts scattered everywhere.

The attack took place close to the Erawan Shrine in the capital's central Chidlom district.

Our correspondent says this a very well known shrine in the centre of Bangkok, next to a five-star hotel.

He says people around the shrine were hit by the full force of the blast.

The explosion was on the Rajprasong intersection, which has been the centre of political demonstrations in recent years.

Our correspondent says bomb attacks in Bangkok are extremely rare.

Kuwait Airways Begins Bookings For 17 Destinations From Aug 1 Kuwait Airways opened bookings for 17 destinations as part of the operation schedule for its flights from 01 Aug, 2020 The national carrier will begin flying to Amman, Bahrain, Bodrum, Baku, Beirut... July 05, 2020 1 14593 Category: Travel

Kuwait Airways Releases Operational Schedule To 31 Destinations Kuwait Airways released an operation schedule for its flights including travel destinations, mentioning the 31 destinations, departure and arrival times in Kuwait time, in addition to the number of da... July 04, 2020 0 14254 Category: Travel

PACI Announces The List Of Services Available From Sunday The Public Authority for Civil Information PACI announced the list of services available online starting from Sunday. According to the list, update personal photo for Kuwaiti and Non- Kuwaiti, Newborn... July 04, 2020 1 7267 Category: Kuwait

Indians Not To Exceed 15%, Egyptians, Filipinos Cap At 10% The Legislative Committee said it approved during its meeting yesterday a proposed ‘quota’ for various nationalities as per the percentages specified in the proposal, reports Al-Seyassah d... July 04, 2020 0 5073 Category: Expats

PCR Test Cost For Departures Between 10 KD – 20 K A responsible government source revealed from August 1st expats will be allowed to return back to Kuwait as per the government plan to gradually resume commercial flights. All the travelers will ne... July 05, 2020 0 4325 Category: Coronavirus

8 Lakh Indians May Have To Leave As Kuwait Approves A Draft Expat Quota Bill A total of 8 lakh Indians may be forced to leave Kuwait as its National Assembly committee has approved a draft expat quota bill seeking to reduce the number of foreign workers in the Gulf country. ... July 06, 2020 0 3841 Category: Kuwait