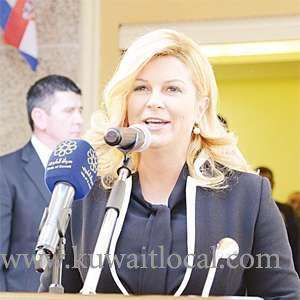 Croatian President Kolinda Graber- Kitarovic Monday said world should understand Europe did not have full resources to host huge number of refugees, thus forcing some countries to close their borders. “Countries of the world should understand that Europe does not have all necessary capabilities to help everybody, which force some European countries to close their doors in face of refugees,” she said. She attributed this action to these countries’ “inability to provide decent living conditions” for the refugees, Graber-Kitarovic said in a statement to KUNA and Kuwait TV following opening of Croatian Embassy in Kuwait, before departure earlier today.

She called for seeking sustainable solutions to organize immigration coupled with ending confl icts that forced those people to flee to save havens. Graber-Kitarovic said she discussed refugee issue with the Kuwaiti leaders she met. “Croatia is a transit for immigrants and refugees who fled from conflicts in their countries. They stay for a short period of time and then move to other European countries, particularly Germany which received a large number of them in past years,” she said.

Graber-Kitarovic,affirmed backing to Kuwait’s quest to waive Schengen visa, while urging Kuwaitis to seize investment opportunities in her country. Croatia fully supports Kuwait’s bid to exempt its citizens from the European Union’s (EU) Schengen visa, Graber-Kitarovic said. She said her visit to Kuwait aimed at discussing a host of international issues of mutual concern, specially peace and fight against terrorism.

The visit, the first by a Croatian President since the European country’s independent in early 1990s, aimed at promoting bilateral relations and cooperation. She expressed content after His Highness the Amir Sheikh Sabah Al- Ahmad Al-Jaber Al-Sabah decorated her with the Order of Mubarak Al- Kabeer. Graber-Kitarovic also presented His Highness the Amir with the Grand Order of King Tomislav, the most prestigious state order of Croatia, in recognition of his role in supporting international peace and security.

The Croatian president termed as “constructive and positive” her meetings with parliament speaker Marzouq Al-Ghanim, His Highness the Prime Minister sheikh Jaber Mubarak Al- Hamad Al-Sabah and other senior officials. Graber-Kitarovic said the Croatian government was adopting “serious measures” to attact foreign investors, including from Kuwait. “Croatia is a country open for trade, we have investments … in many domains including ship building, defense industries, agriculture and food products, in addition to a giant food industry complying with the Islamic Sharia,” she said.

She added that there was a small Muslim community in Croatia, which was contributing to development of the country. Asked about Britain’s leaving of the European Union, Graber- Kitarovic said the will of majority of the British people should be respected although “we are not happy about it.” On the opening of NATO’s Regional Center in Kuwait last month, she said she knew very well the importance of this center in the region specially that she used to be an assistant secretary for general diplomacy in NATO before becoming president.