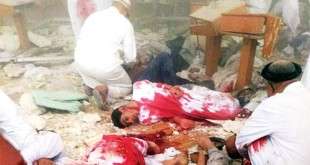 The Court of Appeals, presided over by Judge Hani Al-Hamdan, has postponed hearings in the case of the Imam Al-Sadiq Mosque blast to Nov 5 in order to listen to civil claimants’ pleadings. On Oct 25, the Court of Appeals heard the testimony of defendant Abdulrahman Aidan who was sentenced to death by the Criminal Court, where he and other defendants denied their previous confessions.

The Criminal Court had sentenced seven suspects to death, eight to two-15 years in prison, but acquitted another 15 suspects.

The court had held its first session on the explosion on August 4th, to look into the cases presented against seven Kuwaiti defendants, five Saudis, three Pakistanis, 13 illegal residents and one fugitive with unidentified nationality.

The Public Prosecution had demanded tough sentences against the defendants, as the prosecution’s representative had presented thorough details on the case. They also provided visual evidence on the role of the 29 defendants in the blast, including hiding vital evidence and helping the driver, Abdulrahman Eidan, to escape.

The terrorist attack took place on June 26 during the holy month of Ramadan, leaving 26 worshippers dead and 227 others wounded. The blast sparked wide-scale condemnations from Arab, Muslim and world countries which rejected all forms and manifestations of terrorism