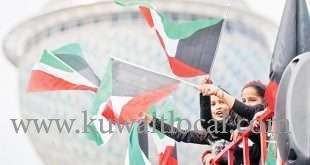 The country will spend around KD 1 billion or $3.3 billion every year for the implementation of the Kuwaitization policy. Government document stating that the above mentioned amount will be used for narrowing the gap between salaries of Kuwaitis and expatriates.

The document disclosed the average salary of citizens employed in government institutions is about KD 1,500 while their expatriate counterparts receive KD 680. Based on these figures, the Kuwaitization of around 96,000 jobs in the public sector will cost around KD 80 million per month.

Kuwaiti economic expert Mohamad Ramadhan was quoted as saying, “The disguised unemployment phenomenon plagues Kuwait’s public sector because welfare distribution is still connected to employment in government jobs for political agendas.” Kuwaitis are not keen on joining the private sector, and many of them prefer to remain unemployed while waiting for a job in the public sector which offers better benefits, perks, less working hours and job security. “Kuwaitis are rarely fired from public sector jobs regardless of their productivity, except in extreme situations like corruption or fraud cases,” Ramadhan pointed out.

On the other hand, the International Monetary Fund (IMF) mentioned in one of its reports that public sector salary in the country is one of the highest in the Gulf region, and this is considered a burden on the State budget. “In order for the government to overcome the challenge of an inflating public sector wages bill, employment needs to be separate from the wealth distribution to citizens. This creates an incentive for Kuwaitis to pursue productivity in the workplace,” Ramadhan explained.

Ramadhan thinks that Kuwaitization of the private sector is doomed to fail for a variety of reasons. “It is very expensive to hire Kuwaitis in the private sector as there is a large gap between salaries of expatriates and Kuwaitis,” he argued.

He added, “Setting a quota for nationals is not a plausible solution as well because it will only lead to fake employment of nationals. There are many professions which can never be filled by Kuwaitis whether in the shortterm or the long-term, such as nursing. “I see the only way to increase employment of nationals in the private sector is to impose incremental fees for employing expatriates, which will make the cost of hiring foreigners almost close to that of hiring locals,” Ramadhan asserted.

The 2016 statistical report issued by the Central Statistics Bureau revealed that expatriates constitute around 26.4 percent of the total number of public sector employees. “Participation of expatriates in the public sector is higher than officially announced and it is difficult to track. This happens through hiring employees registered in the private sector through contracts with government departments,” Ramadhan concluded.