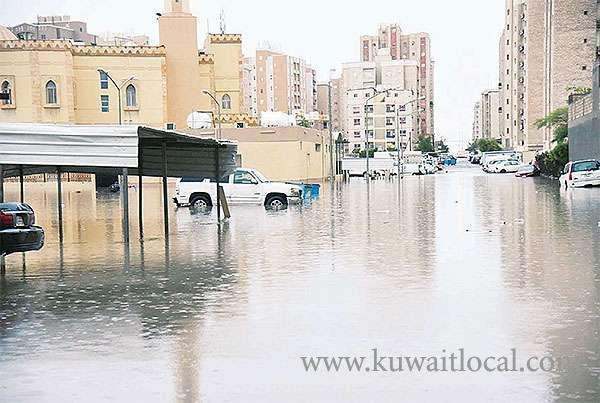 Those affected by heavy rain will be compensated, His Highness the Prime Minister Sheikh Jaber Al-Mubarak Al-Hamad Al-Sabah affirmed on Thursday. His Highness’ remark came during a meeting held, along with senior government officials, at the operations’ room of the Ministry of Interior in Sabhan area earlier Thursday.

Lauding efforts exerted by concerned bodies in dealing with current weather conditions of the country, His Highness pointed out that thanks to such efforts, damage was less, however compensations are due accordingly. His Highness the Premier was briefed with plans and views of state establishments in face of the exceptional weather conditions.

The premier also visited Kuwait International Airport to inspect the situation there, during which he met Director General of the Directorate General of Civil Aviation (DGCA) Sheikh Salman Al-Hmoud who assured him that all operations are back to normal. He met the commanding officers as well and expressed gratitude to the security forces for the efforts they exerted as the expected damages were reduced significantly.

National Assembly Speaker Marzouq Ali Al-Ghanim, meanwhile, praised all state personnel who helped in dealing with repercussions of the latest bout of torrential rainfalls, assuring citizens that they will be certainly compensated for damage inflicted in their properties.

The Parliament Speaker, in remarks posted on Twitter, said Kuwait, Wednesday, passed through “the hardest phase of the heavy raining wave without recording any fatality or serious injuries. “Who never thanks people never thanks (His Almighty) Allah and I would like to address appreciation to personnel of the various sectors who have dealt with the rainfall, namely those serving in the Ministry of Interior, the National Guard, the Army, the fire, public works departments, the Civil Defense, the ministries of health and information as well as other departments,” said the Speaker, shortly after the downpour largely subsided all over Kuwait.

Despite the intense rain, “Our sons and brothers, the departments’ personnel, have overcome themselves working day and night for dealing with the impact of this wave and they have greatly succeeded,” Al-Ghanim added. The Kuwaiti youth have proven that they are up to the challenges at crises’ times, the speaker continued. As to the damage inflicted at some installations, houses and properties, “We affirm once again that the compensation for the damage is an earned duty and not subject to controversy. “The issue as far as the government is concerned is a matter of time for finding the proper and regulating mechanisms for the compensations.”

“The rainfall that has uncovered some flaws is an opportunity for review and bringing the slack personnel into accountability “whoever he maybe,” he has emphasized. On the other hand, security forces reported multiple cases of foreigners deliberately driving their vehicles in heavily flooded areas – presumed to be an intention to fraudulently claim compensation from the government. Therefore, a directive was issued to monitor such behaviors and apprehend those proven guilty.

In addition, Minister of Health Dr Bassel Al-Sabah visited hospitals Wednesday night until the early morning hours Thursday to ascertain their readiness to deal with emergency cases. Also, Head of the Emergency Medical Services Unit Munther Al-Jalahima disclosed the unit received 740 emergency calls which were handled in record time, owing to the proper implementation of the emergency protocol. He said these emergencies include a fire incident in a house in Abdullah Al-Mubarak. He added 11 ambulances and a logistic support vehicle were dispatched to the location handle 11 cases of shortness of breath caused by the smoke.