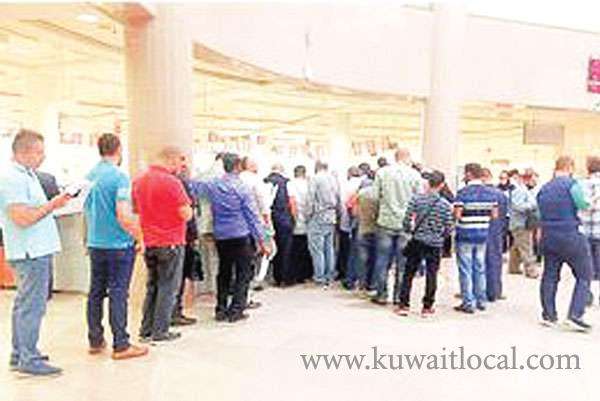 Despite the urgent need for technological development to eliminate the documentary cycle and shortening the procedures, this technical transformation sometimes causes crises due to errors resulting from insufficient preparation for technical applications, reports Al- Qabas daily.

Since the decision by the Ministry of Interior to cancel the residence sticker on the passport, there have been many problems that require to be looked into, most notably the traffic jam in front of the immigration departments and the Public Authority for Civil Information (PACI).

Three and a half hours are lost by an expatriate to correct a mistake made by an employee who fails to complete the transactions to his/her because PACI in South Surrah has not prepared a plan to address the situation where more than one thousand expatriates visit the authority and the number of employees is not enough to complete these transactions.

There are hundreds of complaints from citizens and residents about the failure of some immigration departments and the PACI because they suffer following the decision by the Interior Ministry to do away with the residence stickers on the passports.

A visit to the immigration offices in Farwaniya, Hawalli and the Capital governorates showed most of the people had come to update their data and renew the residence to get identities before the travel season.

The people described what is happening at the immigration departments as unacceptable, pointing out that some employees make mistakes while updating the data.

Once the error is discovered, the application is re-printed and the whole process has to be repeated but it is unfortunate that the expatriate has to pay the fees for the issuance of another civil card, which means KD 10 instead of 5.

There is congestion at the PACI building in South Surrah and although there are 80 counters, the number of employees does not exceed 40%, and the others enjoy sitting around doing nothing. Security officials tried to control the chaos, but all that they could do was preventing those with no numbers from entering the inner hall.

How To Update Your Civil ID Name In PACI Website

Verify Spellings On Civil ID And Passport, Mistake Could Prevent Entry And Exit From Kuwait