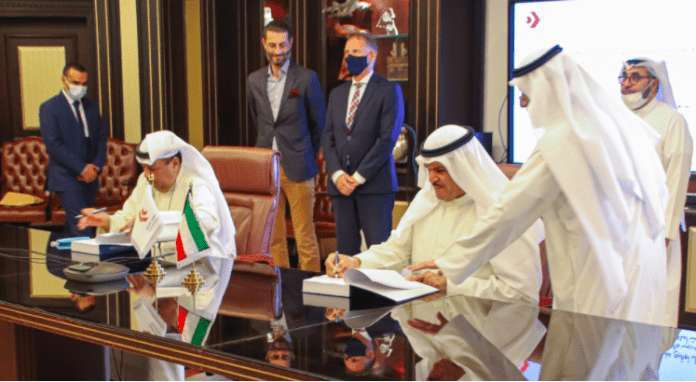 Kuwait Civil Aviation signed a deal on Wednesday with the Canadian Intelcan Technology System Company worth in total KWD 3.170 million (about USD 10.1 million) to operate the newly developed third runway and improve its navigation systems at Kuwait International Airport (KIA).

The contract was signed by the President of the Kuwait Civil Aviation Sheikh Salman Al-Hmoud Al-Sabah and Sami Al-Amer, the Director of Al-Muntaha Real Estate and Construction Contracting Company, which is the Intelcan’s local agent in Kuwait, in the presence of the General Director of Civil Aviation Yousef Al-Fawzan.

Civil Aviation Spokesman Saad Al-Otaibi said in a statement to KUNA, on the sidelines of the signing ceremony, that the agreement would also provide the design, supply, and provision of training and maintenance services, which in its entirety represent the implementation of the Kuwait International Airport development plan.

Al-Otaibi added that the agreement contributes to the technical support for the Automated Landing Aid System (ILS) and the modernization and modification of the system’s locations on the eastern runway at Kuwait International Airport. Al-Otaibi noted that the implementation period is 550 days, and the project will be implemented under the supervision of DEERNS.

The spokesman indicated that this project is part of a package of projects being proposed by the General Administration of Civil Aviation to operate the new third runway and develop air navigation and meteorological systems at Kuwait International Airport. The project includes training Kuwaiti cadres on operating and maintaining the system.