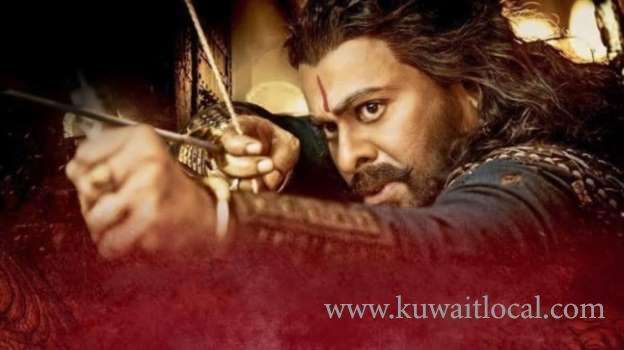 South Indian superstar Chiranjeevi is realising his long nurtured dream of playing a freedom fighter in an epic set in pre-independence India, produced by none other than his actor son Ram Charan.

It’s a reversal of roles of sorts, when a son produces his father’s film.

The Telugu star is returning to screen after 10 years of active political life with his 151st film titled ‘Sye Raa Narasimha Reddy’, a role he says has been nudging him for the past 12 years.

This period film unearths the story of a little known freedom fighter — Narasimha Reddy of Rayalseema — counted as a pioneer among Indian freedom fighters. In the making for over two and a half years, the film shines with star cast chosen from different languages of India. While Chiranjeevi plays the eponymous character, he is supported by veteran Bollywood actor Amitabh Bachchan, Tamil actor Vijay Sethupathi, Kannada actor Sudeep and actresses Nayanthara and Tamannah in key roles. Directed by Surinder Reddy and made at a budget of Rs2.75 billion (Dh143.07 million), the film’s cast talk about the epic, out in the UAE this weekend.

Raja has worked in Tamil, Telugu and Hindi cinema. The story of ‘Sye Raa Narasimha Reddy’ was initially conceived by the Paruchuri Brothers. Taking it further, writer Bhupathi Raja and director Surinder Reddy visited Rayalseema to get the ball rolling. They gathered inputs on Reddy from senior citizens who shared stories handed down from generations.

“There are no records on his life,” said Raja who first worked with Chiranjeevi on ‘Mutha Masthri’ in 1993. Subsequently, he worked on 10 more.

“How do I make the story interesting for today’s generations?” was the big question for Raja.

“This is not just a war film, but also an emotional tale of two women whose lives were transformed by Narasimha. The challenge was to draw in the family audience too. This is a pan Indian film, not a Telugu film — a film that speaks of patriotism,” said Raja.

Sharing trivia, he added that Reddy was known for his photographic memory.

Kannan has been in the industry for 12 years, his last release was ‘Pailwan.’

“We liked the climax of the story by Paruchuri Brothers and felt that we could work on the fictional aspect of it,” said this fan of Hollywood epic film ‘Braveheart’. Saddled with research on Narasimha, he left for Goa with director Surinder Reddy where they spent the next three months on the screenplay.

“Narasimha Reddy was a legendary freedom fighter and considered God in Rayalseema. We probed into his life. Why did 7,000 people, including farmers, join Narasimha in his war against the British, who called him a dacoit? Sye Raa meaning ‘Are you Ready,’ and is a war cry,” explained Kannan.

“Keeping in mind today’s audience, we worked on making our writing good. We kept in mind the need for visual elements that will leave an impact. Our emphasis is on the rich civilisation of India, which was endorsed by Lord Macaulay in his well known speech in the British Parliament. We want to make the younger generation aware of our rich past and of this hero with high moral values. ‘Baahubali’ was a fictional story and one could be imaginative, but with ‘Sye Raa’ we have to be true to history,” he added.

Rajeevan Nambiar was the first to come on board in March 2017.

Sets were erected on the outskirts of Hyderabad over 9 hectares of land that included eight villages, two forts, two palaces — one exterior and one interior — and two temples.

Even while shooting, the research team worked digging into museums and libraries. Simple questions surfaced, ‘Did women use glass bangles at the time? What kind were they?

Costumes for the British were designed depending on their cadres and rank- infantry or cavalry. How do you create the hero’s house-that was not a palace, nor a regular house. Being a Polygar (zamindar like title), Narasimha’s house was a fortress but not the Rajashtani type. Weapons were another aspect. Each Polygar had a unique weapon with their own emblems. We had to create a brand for them.

Nambiar added, “We could not shoot at random and tried to be true to history. My task was to make the production house understand our requirements. They gave us full support.”

The battle scenes were staged in Georgia. Identifying correct locations they carried one and half container of weapons. About Amitabh Bachchan, Nambiar said that the legend was full of questions. “He wanted to know the entire scenario.” Praising Chiranjeevi’s undying enthusiasm, he said, “He has an eye for everything and would check on the sets every day.”

“My job was to create a look and colour palette for the entire film. We had no idea where to start with very little information on Narasimha Reddy,” said Uthara. There were just four sketches of him online. Referring to pictures of people from that era, we began sketching. We prepared a colour chart based on each scene. My emphasis was on the use of colours to suit the characters and not the actors. The colours dominating this period were mostly maroons and indigo. Off white too. We tried different hair styles for Chiranjeevi.”

Styling the look of the leading women — Tamannah as the vivacious lover and Nayanthara as the demure wife — was next. With a host of characters filling up the story, Menon worked on looks for villagers, tribals, Britishers of varying ranks, not to forget the look for a guerrilla warfare.

“We commissioned a company in Delhi to make accessories for the British. Our search for buttons with East India company logo took us to Charminar (Hyderabad), a treasure box for finding the impossible.”

Menon styled the entire look for the film and Mumbai’s noted designer Anju Modi took it ahead along with Chiranjeevi’s daughter Sushmita Konidela.

“The research was time consuming yet a great learning. It was our conscious call to keep the film stylish without being loud. New fabrics were dipped in boiling tea for the aged look. Brushing up with antique gold on garments was another ploy to get the period look.”

Her association with production designer Rajeevan, Menon has resulted in a harmonious blend.

She added, “We wanted it to be on par with international films.”

Rathnavelu known for his work on ‘Enthiran’ ‘Lingaa’ and the recently released ‘Rangasthalam,’ (Telugu) said that it was not an easy film to shoot.

“Narasimha Reddy is a historical character. I had to strike a balance between not making it too glossy and not so real to resemble a documentary. The colour palette had to be earthy and not modern. Depicting an era where there were no lights, we shot a good deal in natural light. We did not use modern lights much.”

The battle scenes came with stumbling blocks especially the ones shot at night.

“We simulated torch fires used in that era. For another war scene with two thousand people I designed my own lights. The climax battle field scene staged with a large crowd of people was a challenge shooting with four to five cameras. Filming across acres of open ground with moving horses and people was a tough task.” Chiranjeevi being a good horse rider did the scenes himself. For the others, horse movements were simulated through animatronics. And, with a schedule of a multi-star cast, Rathnavelu’s regimen involved shooting fast and working continuously. 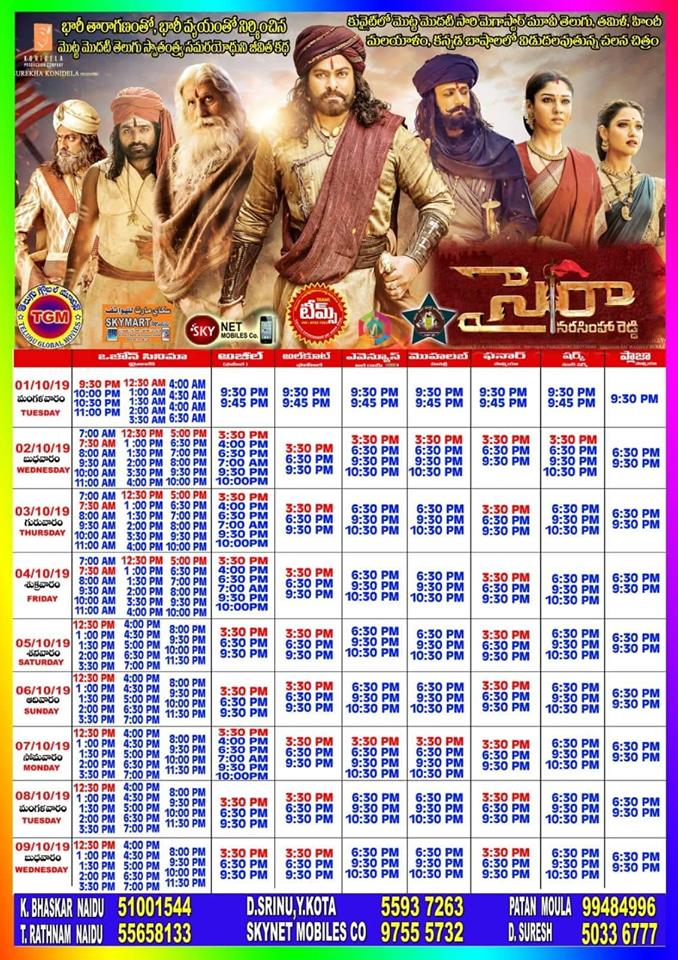 ‘Sye Raa Narasimha Reddy’ releases in the Kuwait on October 2. It has also been dubbed in Hindi, Tamil, Malayalam and Kannada,

“Playing Narasimha Reddy was a dream come true. Since the past 12 years, I have been eager to depict this freedom fighter. Due to budget restrains ‘Sye Raa’ could not be made earlier. Besides, it required today’s technological support. When I returned to screen after nine years, I was initially apprehensive. The success of ‘Kaidhi No 150’ [remake of Tamil film ‘Kathi] gave me the encouragement to take on ‘Sye Raa Narasimha Reddy’.”

Thanking his father for the opportunity to make ‘Sye Raa..’, Charan shared an anecdote of the past. It was during the promotion of his film with Tamannah. Charan remembered his father telling him that whenever he returned to cinema he wished to work with Tamannah. If that surprised Charan then, he realised years later that the magic of cinema could make anything possible. “After being paired with me, Tamannah is paired opposite dad,” he said.

— Chiranjeevi is Narasimha Reddy, who inspired the common people to join him in a war for freedom from the British. This war, set in 1847, is the first freedom struggle, much before the Sepoy Mutiny of 1857.

— Amitabh Bachchan is Narasimha’s guru, Gosayi Venkanna. He motivated Narasimha to lead the people against the British. A linguist who knew more than five languages, he was sought out for his wisdom.

— Kannada actor Sudeep is Avaku Raja, Narasimha’s rival initially, who later unites with him to fight the British.

— Tamil actor Vijay Sethupathi is Raja Pandi, a Tamilian who goes to Uyalawada to join hands with Narasimha.

— Nayanthara is Reddy’s wife, Siddhama, a pillar in his freedom fight.

— Tamannah is Lakhsmi, Narasimha’s lover. From a dancer singing in temples initially, she is inspired by Narasimha to become a rebel against the British.