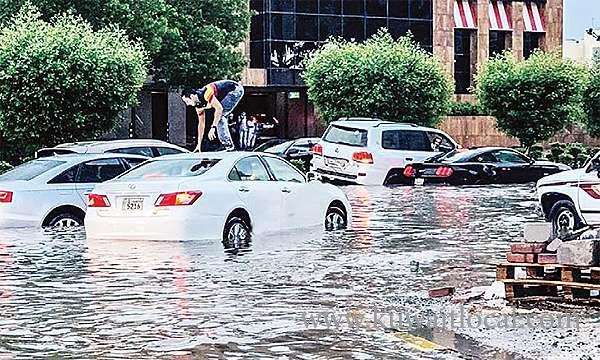 Although grateful for the quick and substantial steps taken by the government against the head of the Public Authority for Roads and Transportation (PART), undersecretary and assistant undersecretaries at the Ministry of Public Works by referring them for retirement and investigation because of failure to carry out their duties which led to flooding in many houses, State facilities and vital highways; MPs still expressed anger over the incident and called for intensive investigations.

In a press statement, MP Khaleel Al-Saleh pointed out this incident has unveiled the level of corruption and negligence in construction and maintenance contracts. He called for thorough investigation of all road related projects and to identify those who should be held responsible as they harmed the country and its people. “We should prevent the recurrence of floods as lives could be in danger, not just possessions,” he asserted.

This has prompted the MPs to submit a request to form a parliamentary investigative committee which will look into the situation and the government’s lack of preparation for the rainy season, as well as present recommendations to prevent such incidents from recurring.

On the other hand, MP Sa’doon Al Otaibi disclosed that he and some of his colleagues previously called for the dissolution of PART due to its impracticality and huge annual budget — KD 500 million. He argued PART’s expertise clashes with numerous other governmental authorities and it has been proven to be a failure; hence, the need for quick passage of a bill on its dissolution.

Furthermore, Public Utilities Committee Chairman MP Mohammed Al- Hadiya said the committee invited all concerned authorities to a meeting on Sunday to discuss the flooding crisis, as authorities are pointing fingers at each other and none has taken responsibility until now. In another development, the parliamentary Priorities Committee has been witnessing tension amongst its members as reflected in several press statements on what should be regarded as priorities.

MP Mohammed Al-Dalaal said there is no harmony within the committee, warning this will negatively affect the committee’s work. He revealed some members talk about priorities based on their personal views, which is slowly making him reconsider his membership in the committee.

Moreover, MP Salah Khourshed submitted a number of queries to the minister of health on the employment and replacement policy. He wants to know why the policy is not implemented in health offices abroad. He said he found out that Kuwait’s health offices abroad employ individuals of various nationalities; thereby, giving them access to confidential medical information and correspondence between the office, Ministry of Health and the State. He requested for details such as the exact number of foreign employees in these offices, employees’ data, and copies of complaints submitted by citizens on how they are treated in these offices