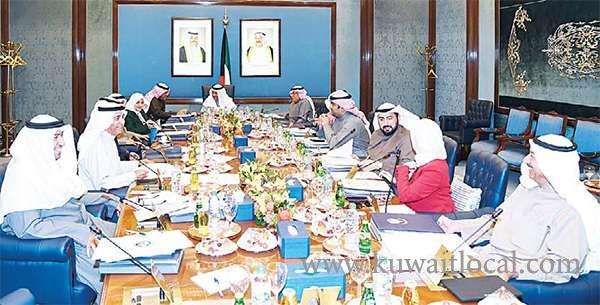 Meanwhile, the Cabinet assigned Kuwait Investment Authority to study establishment of a state company with a mandate of establishing infrastructure for the communication sector. On the other hand, Deputy Prime Minister and Foreign Minister Sheikh Sabah Khaled Al-Hamad Al-Sabah briefed the Cabinet about outcome of a recent visit by Austranian Foreign Minister Karin Kneissl, and her talks with officials regarding relations between the European Union, Kuwait and the GCC. Kneissl, said Sheikh Sabah Al- Khaled, appreciated His Highness the Amir Sheikh Sabah Al- Ahmad Al-Jaber Al-Sabah’s role in solving confl icts.

Sheikh Sabah Al-Khaled also briefed the Cabinet about a recent visit by Argentinian Foreign Minister Jorge Faurie and the talks he held with the senior government officials. He then talked about outcome of the visit by Alistair Burt, British Minister for Middle East, to co-chair Kuwait- Britain joint committee.

Sheikh Sabah Al-Khaled briefed the Cabinet about the visit of German Foreign Minister Heiko Maas, whose discussions with Kuwaiti officials aimed at developing humanitarian partnership with the aim of making international aid more effective and efficient. Meanwhile, the Cabinet discussed on Monday political reports on the current developments at Arab and international levels, a government statement said. On the occasion of the National Day of Bahrain and Qatar, the Cabinet congratulated King Hamad bin Isa Al-Khalifa of Bahrain and Sheikh Tamim bin Hamad Al-Thani, Amir of Qatar, and the two friendly peoples.

The Cabinet praised the remarkable achievements in the Kingdom of Bahrain and Qatar, wishing them further progress and prosperity. On the other hand, the Cabinet welcomed the adoption by the Security Council of a resolution cosponsored by Kuwait and Sweden on the renewal of the mechanism of humanitarian access across the border into Syria for 12 months, expressing its appreciation to all members of the Security Council for their support. The Cabinet also welcomed the agreement reached by the Yemeni parties in the wake of the peace consultations held in the Swedish capital, Stockholm, recently, stressing this agreement is a “good and important” step for a comprehensive solution to the confl ict in Yemen according to the Gulf initiatives, its executive mechanisms and outcome of national dialogue.

The Cabinet called on the Yemeni parties to abide by this agreement to pave way for restoration of security, peace and stability in Yemen, thus ending bloodshed and alleviating the suffering of the Yemeni people. In regard of the terrorist attack that took place in the French city of Strasbourg recently, which resulted in a number of deaths and injuries, the Cabinet stressed rejection to all forms of violence and terrorism, expressing sincere condolences to the French people.

The Cabinet expressed its sincere condolences to President Recep Tayyip Erdogan and to the Turkish people following a train crash in Ankara, which killed and injured many people, wishing a speedy recovery to the wounded.