<![endif]-->
Advanced Search
Cabinet Decides KIA Suspension To Be Under Review According To Developments
Category: Information 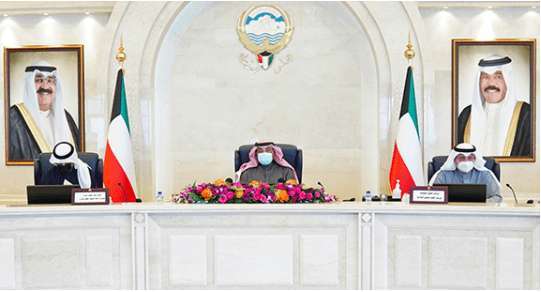 His Excellency the Deputy Prime Minister and Minister of Defense Sheikh Hamad Jaber Al-Ali Al-Sabah thanked His Highness the Amir and His Highness the Crown Prince for the trust that was given to him, pledging to do his utmost efforts to achieve prosperity to the State of Kuwait. Later, the Council of Ministers reviewed the contents of His Highness the Amir speech at the opening of the first ordinary session of the sixteenth legislative session of the National Assembly, which took place last Tuesday, and the inspiring directives contained within, urging members of the National Assembly to make their practice and deliberations a testament for generations to come.

The cabinet also reviewed the contents of the Amiri speech at the opening of the first ordinary session of the sixteenth legislative term delivered by His Highness the Prime Minister, in which he emphasized the government’s belief that cooperation with constitutional institutions is the cornerstone in achieving sound democratic practice and its stability, as well as the aspiration of the government. With extended hands and a sincere desire for a new approach. Meanwhile, the Council of Ministers, mourned also late Sheikh Nasser Sabah Al-Ahmad Al-Jaber Al-Sabah, the first deputy prime minister and former minister of defense who passed away yesterday, and the council mourned with grief and sorrow for the dear deceased, in appreciation for the deceased’s sincere efforts to assume responsibility for his work efficiently And sincerity in serving his country. The Council of Ministers mourned the passing of Abdulaziz Mohammad Hmoud Al-Shaya, the former Minister of Electricity and Water, recalling with pride his efforts in serving the nation, his fingerprints and national contributions in various fields. Then Minister of Health, Sheikh Dr. Basil Hammoud Al-Sabah, explained to the Council the latest developments on the Coronavirus pandemic at the global, regional, and local levels, especially after the emergence of a new strain of the virus.

The reassured the Council about the health situation in the State of Kuwait, which is witnessing improvement and stability, citing data and statistics that confirm the decrease in the number of infections and those who receive treatment, and those in the intensive care units. The Council also was informed on the latest preparations related to efforts to combat Coronavirus and ways to prevent it, coinciding with the approaching date of the start of the vaccination campaign against this deadly virus.

In this regard, the cabinet examined the recommendation of the coronavirus emergency ministerial Committee and decided the following: 1- Suspending commercial flights to and from Kuwait International Airport from 11 pm today, Monday 12-21-2020, until the end of Friday, January First, 2021, which excluded cargo shipments planes, however the continuation of this decision will be reviewed in light of new developments. 2- Closing, land and sea border ports, except for shipping operations. 3- Assigning each of (Ministry of Interior – General Administration of Civil Aviation – General Administration of Customs – Kuwait Ports Authority) to implement what was mentioned in the previous decisions.

The Council of Ministers called on all citizens and residents to continue to be cautious, and not to be complacent in adhering to health requirements and instructions, and to keep away from gatherings to ensure that the spread of the virus is limited in order to preserve the overall health in the country.

The Minister of Justice, Dr. Nawaf Saud Al-Yaseen, also presented to the Council of Ministers the second periodic report (October 2020) for the committee to follow up on public money issues that included data on public funds issues and the responses of ministries, agencies and government institutions about these issues and their status before the competent authorities, and assigning Minister of Justice to transfer the report to the National Assembly.

Then the Cabinet decided to accept the donation made by Mr. Ayed Hatlan for the design, licensing, establishment and implementation of a specialized health center in South Sabahiya, with a value of KD 2.5 million. The Council of Ministers expressed its thanks and appreciation for this initiative and what it constitutes as a vivid embodiment of what the Kuwaiti society, which has created in the forms of cooperation, solidarity, patriotism and true responsibility. The Council of Ministers then discussed political affairs in light of reports related to the overall current developments in the political arena at the Arab and international levels, and in this regard the Cabinet expressed sincere congratulations and congratulations to His Highness Sheikh Tamim bin Hamad Al-Thani, Amir of Qatar and to brotherly Qatari people on the occasion of the anniversary of the National Day of the State of Qatar. Wishing the State of Qatar and its people continued pride, progress and prosperity.

The cabinet also strongly condemned the terrorist act that targeted the Green Zone in Baghdad, affirming that the State of Kuwait stands with the Republic of Iraq and supports all measures it takes to maintain its security and stability.