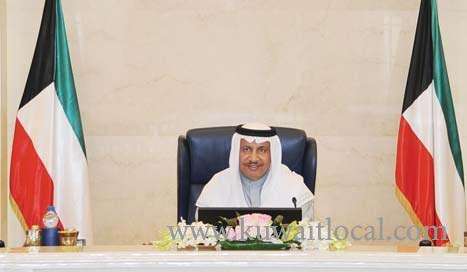 His Highness the Prime Minister Sheikh Jaber Mubarak Al-Hamad Al-Sabah has voiced deep pride at the serious stand, and the significant and positive role undertaken by His Highness the Amir Sheikh Sabah Al-Ahmad Al-Jaber Al-Sabah’s at the recent OIC summit in support of the just Palestinian cause and the legitimate right of the brotherly Palestinian people.

Policy
Such a policy made explicitly by Israel constitutes a challenge to advocates of the heavenly religions and is a blatant violation of the United Nations Security Council resolutions. His Highness the Prime Minister praised His Highness the Amir’s resolve to exert serious efforts for the issuance of a UN resolution on providing international protection for the Palestinian people — who have been facing oppressive practices by Israel and for setting up their independent state.

His Highness the Premier stressed that such stances and efforts by His Highness the Amir come as part of his bright record in backing the Palestinian rights, the Arab causes and international justice and peace issues. Deputy Prime Minister and Foreign Minister Sheikh Sabah Al- Khaled Al-Hamad Al-Sabah briefed the ministers on the positive results of his recent tour that included Saudi Arabia, Bahrain, Qatar, the UAE and Oman.

During the tour, Sheikh Sabah Al-Khaled conveyed messages of His Highness the Amir to his GCC leaders as part of continued consultations and coordination among on different issues pertaining to the ongoing situation in the Gulf region.

The messages reflected the depth of consolidated relations among GCC states and the desire of enhancing these ties in all domains, as well as latest developments on both regional and international levels. Sheikh Sabah Al-Khaled also apprised the ministers of outcome of the extraordinary meeting of the Arab League Foreign Ministers in Cairo recently.

The meeting discussed developments in the aftermath of the illegal decision by the US administration on the relocation of its embassy to Israel from Tel Aviv to Jerusalem as well as the Israeli attacks against the Palestinian people.

In the meantime, the Cabinet reviewed today recent media reports claiming that government bodies had provided financial assistance to people, who deserve it, through MPs.

The ministers affirmed that the government deals with all MPs in accordance with the constitution and the law, stressing that the desired cooperation comes within the framework of legislation and control, Al- Saleh said. Providing financial assistance to citizens, either through official bodies or charities, is conducted in line with mechanisms, procedures and approved financial systems which ensure the delivery of support to those who deserve it fairly, with no need for mediation, he added. The Cabinet reviewed the topics on the agenda of the National Assembly.

Meanwhile, the Cabinet on Monday strongly condemned the Houthi militia’s recent launch of ballistic missiles on southern Saudi city of Khamis Mushait. The missiles were successfully intercepted by the Royal Saudi Air Force. During a routine meeting held Monday at Seif Palace and chaired by His Highness the Prime Minister Sheikh Jaber Mubarak Al-Hamad Al-Sabah, the Cabinet said the vicious aggression by the Houthis targeting the Kingdom’s security and stability demonstrates the group is not serious in responding to the international efforts seeking an end to the conflict in Yemen.

Support
The ministers reaffirmed Kuwait’s support to Saudi Arabia and whatever measures the Kingdom might take to maintain its security and stability, Deputy Prime Minister and Minister of State for Cabinet Affairs Anas Al- Saleh said after the meeting.

They also prayed for perpetual security and safety for the Kingdom under the wise leadership of King Salman bin Abdulaziz Al Saud. By the same token, the Cabinet condemned the recent suicide attacks that hit northern Baghdad, killing and wounding many innocent people. It reiterated Kuwait’s firm stance in rejection of all forms and motives of terrorism, Al-Saleh added.

In addition, the Cabinet condemned the act of terrorism that recently killed a police officer in Egypt’s Sinai Peninsula, when a bomb hit a military armored vehicle, reaffirming Kuwait’s support to Egypt and whatever moves it might take to protect its security and stability.

The Cabinet deplored the recent school shooting incident that occurred in Santa Fe, Texas, US, killing and wounding several people. The ministers said that such criminal acts that target innocent people run against all faiths and human values. The meeting stressed Kuwait’s unwavering stance rejecting all forms of terrorism, as well as the country’s support to the international community to fight it and dry up its sources. The ministers offered condolences to President Miguel Diaz-Canel of Cuba, and the Cuban people over the victims of the recent plane crash in Havana