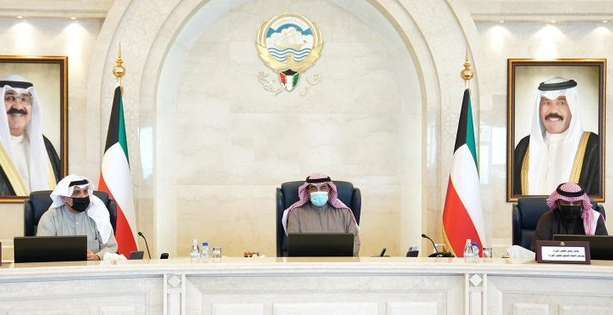 The State of Kuwait Cabinet held its weekly regular session under chairmanship of His Highness the Prime Minister Sheikh Sabah Khaled Al-Hamad Al-Sabah at Seif Palace on Monday.

The session was marked with deep alarm expressed by the ministers when they were addressed by the minister of health about latest status of the pandemic in the country, amid mounting cases and deaths, and with a decision to help covid-stricken entrepreneurs with financial allotments.

Following the session, Deputy Prime Minister and Minister of State for Cabinet Affairs Anas Al-Saleh stated that it kicked off with a briefing by Minister of Health Sheikh Dr. Basel Humoud Al-Sabah about latest local health status with respect of the novel coronavirus (COVID-19). Statistics showed spike in the cases of infections, deaths and patients who receive medical treatment as well those being admitted at the intensive care units, amid decline of recovery rates, minister Dr. Bassel affirmed during the session.

He attributed the drastic increase of the cases and infections to non-compliance by the health terms, holding gatherings and social occasions’ activities. The ministers expressed profound concern at the “phenomenal slack and complacency” with respect of applying the health conditions, triggering a second pandemic wave in the country. Upon these facts, the cabinet urged citizens and residents to take all necessary precautions and remain vigilant to spare themselves infection with the contagion and curb its spread.

Moreover, the government urged everybody to rapidly seek to get the vaccination against the germ noting that the extraordinary health situation warranted cooperation from all in the country. After revising recommendations by the ministerial committee for emergency response to the coronavirus, the cabinet decided to task the fire force and the National Guard to aid the health authorities in enforcing the health precautions and ensure serious abidance in various sectors.

The decision is effective as of March and valid for three months. Another decision stipulates assigning the competent authorities to delay payment of the State services fees to the entrepreneurs whose businesses have been shut for three months. It confirmed that the national days holiday begins on Thursday, February 25, until Feb. 28.

The government expressed strong condemnation of the attacks against civilians and civil areas in Saudi Arabia, noting that these activities, launching booby-trapped drones and ballistic missiles by the Houthi militia, pose a threat to regional stability, constitute blatant violation of international laws and covenants and undermine international efforts aimed at establishing peace and ending the conflict. The Kuwaiti Government also called on the United Nations Security Council to take immediate measures to repel the criminal attacks in a manner that may preserve security and peace in Saudi Arabia and the Gulf region.