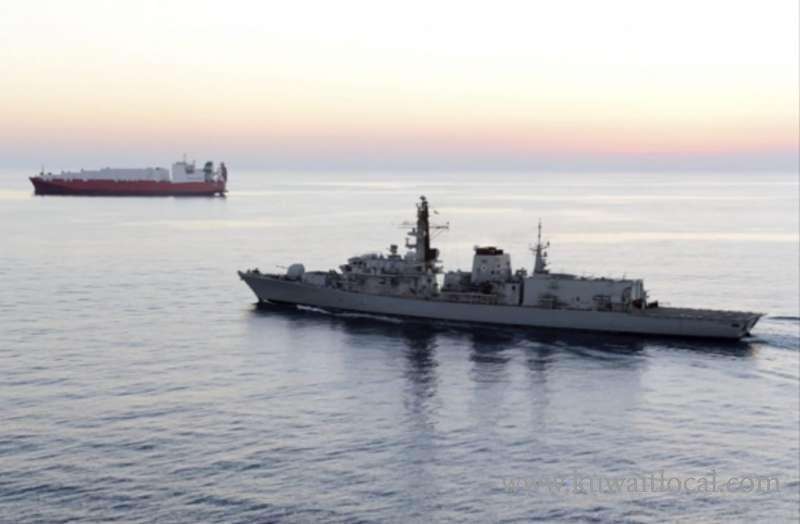 Three Iranian vessels tried to block a British-owned tanker passing through the Strait of Hormuz, but backed off when confronted by a Royal Navy warship, Britain said on Thursday.

Exactly a week after Britain seized an Iranian tanker accused of violating sanctions on Syria, London said the British Heritage tanker operated by oil company BP had been approached in the strait, main outlet for Middle Eastern oil. “HMS Montrose was forced to position herself between the Iranian vessels and British Heritage and issue verbal warnings to the Iranian vessels, which then turned away,” a British government spokesman said in a statement. It urged Iran to “de-escalate the situation in the region”. Iran’s Foreign Minister Mohammad Javad Zarif dismissed as “worthless” the allegation that Iran sought to block the ship.

Sky News later reported that Britain was now urging all British flagged ships to go to a higher state of security when passing through the strait. The United States blames Iran for a series of attacks on shipping in the world’s most important oil artery since mid-May, accusations Tehran rejects but which have raised fears the long-time foes could stumble into war. The United States and Iran came as close as ever to direct military conflict last month, when Iran shot down a US drone and Trump ordered retaliatory air strikes, only to call them off minutes before impact. “I’d expect the Iranians to continue to seek opportunities to harass and obstruct without sliding into war,” said Jon Alterman director of the Middle East Program at the Center for Strategic and International Studies think-tank. The United States quit an agreement last year between Iran and world powers to curb Iran’s nuclear programme in return for granting it access to world trade.

Washington sharply tightened sanctions against Iran since May with the aim of bringing its oil exports to zero. Iran responded by stepping up production of enriched uranium beyond limits in the nuclear deal. Washington’s European allies disagreed with Trump’s decision to quit the nuclear pact and have tried to appear neutral. But Britain stepped into the crisis when its Royal Marines seized the Iranian tanker Grace 1 off the coast of Gibraltar last week. Although EU states have not followed Washington in imposing sanctions on Iran, they have sanctions in place that forbid selling oil to Iran’s ally Syria.

A senior Iranian military commander on Thursday said Britain and the United States would regret detaining the vessel. Other Iranian offi- cials have made similar statements, and some figures have been quoted threatening retaliation against British ships.

A spokesman for the US military’s Central Command said threats to navigation require an international solution: “The world economy depends on the free flow of commerce, and it is incumbent on all nations to protect and preserve this lynchpin of global prosperity,” said Captain Bill Urban. US sanctions have effectively driven Iran from mainstream oil markets, depriving it of its main source of revenue and of the benefits it was meant to receive from its nuclear deal. Iran says it will return to full compliance with the agreement only if sanctions are lifted and Washington rejoins the pact. BP CEO Bob Dudley, asked about the situation in the Gulf at an event at London’s Chatham House on Wednesday evening, said: “We’ve got to be super careful about our ships”.

5 Year Residence For Expats And 10 Years For Expat Businessmen A new residency law will be introduced that underlines that an expat can acquire a residency visa for up to 5 years and for an expat businessman with a valid project, it is for 10 years. Among the ... August 12, 2020 2 7945 Category: Expats

Large Scale Expat Deportation Plan In Progress Planning is underway for the large scale arrest and deportation of around 126,000 expatriates living illegally in Kuwait, reports Al Jarida daily. They did not take advantage of the amnesty in April a... August 11, 2020 1 6740 Category: Expats

After Days Of Waiting, First Flight Left To India From Kuwait Today After a long wait of more than three weeks, the flight to India resumed from Kuwait international airport today with the first flight carrying 322 Indians stranded here to Delhi. The flight, arrang... August 11, 2020 0 6365 Category: Kuwait

Ban On 31 Countries To Continue - No Request To Bring Expat Workers From Any Ministries The Supreme Committee for the Restoration of Commercial Flights at Kuwait International Airport held a meeting yesterday to review the procedures for flights operations. Volume 0% According to the... August 13, 2020 0 3279 Category: Travel

Only educated expats over 60 will have their residence renewed Public Authority for Manpower (PAM) has announced that expats at the age of 60 and above, without a university degree will need to make preparations to leave the country by end of this year. They are ... August 11, 2020 2 3220 Category: Expats

DGCA Did Not Receive Any Request To Bring Back Expats Stranded Abroad The government institutions did not send a request to make preparations for the return of expats stranded abroad, especially needed professions in Kuwait such as doctors, engineers, judges, other expe... August 13, 2020 0 2836 Category: Kuwait