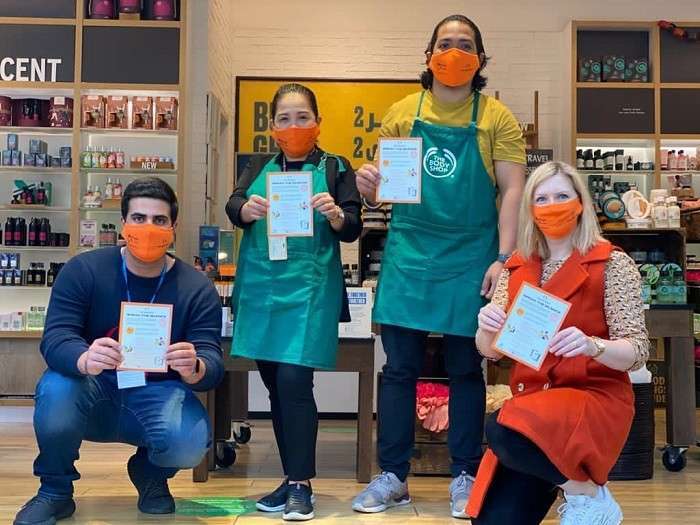 Soroptimist Kuwait is proud to announce The Body Shop as its partner in launching the Orange Kuwait project, this year. The initiative stems from the ‘Orange the World’ campaign, launched by the United Nations to highlight the security and safety of women and girls in Kuwait. The annual 16-day worldwide campaign to Eliminate Violence Against Women started on 25 November, which is the International Day for the Elimination of Violence Against Women, and runs until 10 December, which is the Human Rights Day and set by the United Nations.

The campaign aims to raise awareness on the need to end violence against women and girls and encourages people to take the right measures to secure the safety and rights of women and girls. The United Nations has taken orange as the symbolic colour, to signify a bright new future.

The Orange Kuwait project, which was established in 2016, seeks to organize discussion circles around topics related to local events, legislation, education and health about reducing violence against women. These discussion circles aim to find creative solutions to support and help women. The project also works in organising media campaigns to spread awareness and education in the community, in addition to cooperation and partnerships with various authorities in the state in order to reach the widest audience.

As a partner of ‘Orange Kuwait’ The Body Shop has supported publishing survey results by the Orange Kuwait Poll Team from research that was conducted in December 2019. The study did not target a specific gender, but rather sought to come up with results that reveal the extent of violence in general in Kuwaiti society. The awareness campaign began early in October and is focused on educating the community about different types of violence.

In a statement by Dr. Amar Behbehani, President of Soroptimist Kuwait, she pointed out that violence is not defined by age, gender, nationality, or social class. Violence is an abnormal behaviour that threatens the security of humanity and added that the association has classified 11 types of violence according to social and psychological studies and the United Nations guide. According to the study, it was discovered that 61.92% of the participants had been exposed to some form of violence. Of these, 91%  experienced verbal violence, 72.4%  experienced emotional violence, 46.8%  experienced physical violence, and 22% experienced economic violence. The study showed that 66% were subjected to violence by men, of whom 42.3% were close relatives. More than 70% demand the establishment of specialized counselling centres to treat the phenomenon.

The Body Shop Kuwait is building awareness of the campaign by wearing orange masks from 25 November to 10 December, as well as supporting the program financially by donating 7 fils from each sales transaction from 4 November to 19 December  to Soroptimist Kuwait.