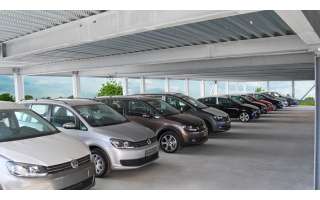 New, multi-storied buildings cause of lesser car parkings’ – ‘Make basement parking mandatory’  In this week’s Arab Times online poll, readers weighed in on the issues they want the municipality to tackle in their neighbourhoods, 57 percent of voters felt that congestion caused by insufficient parking spaces to be the most pertinent.

“Over the past few years all the old two and three floored buildings in our block have been demolished and replaced by taller buildings with more apartments but not enough parking spaces. The residents have no other alternative but to park along the street and this makes movement very tight on already narrow roads,” a reader shared.

“Basement parking spaces should be mandatory now in order to obtain building permits for new constructions. I also think multi-storeyed parking lots should be constructed on vacant strips,” another voter told the Arab Times.

18 percent felt that waste disposal and recycling should be the highest priority of the municipality in their locales. “Waste is overflowing in my neighbourhood. There is just so much accumulation of garbage that the once a day collection of it seems so futile. We need more bins and more frequent rounds,” a respondent shared.

“A vacant lot opposite my building in Salmiya, although fenced, has become a garbage dump for people in the surrounding buildings where they mainly dispose old furniture and other large household waste. This became very dangerous a few months ago when a fire started and very quickly got out of control. A car parked adjacent to the lot, suffered damage and this could have been avoided if there were more bins for use,” a reader informed.

9 percent of respondents that the quality of roads and street utilities needed more attention. “The quality of the roads in my neighbourhood are deteriorating and no one seems to do anything about it. There are so many potholes and cracks now that desperately need to be resurfaced.”

“Something needs to be done about the drainage system. The roads clog up with water so easily whenever it rains,” another voter pointed out.

16 percent felt that more greenery and beautification projects were necessary in their neighbourhoods. “I love to see more greenery in the area I live, more grass and shrubs would make the area look less drab. There is good landscaping and ample greenery along main roadways but it would be nice to have more trees in inner residential areas as well.”

5 Year Residence For Expats And 10 Years For Expat Businessmen A new residency law will be introduced that underlines that an expat can acquire a residency visa for up to 5 years and for an expat businessman with a valid project, it is for 10 years. Among the ... August 12, 2020 2 7015 Category: Expats

After Days Of Waiting, First Flight Left To India From Kuwait Today After a long wait of more than three weeks, the flight to India resumed from Kuwait international airport today with the first flight carrying 322 Indians stranded here to Delhi. The flight, arrang... August 11, 2020 0 6133 Category: Kuwait

Allow Entry To Non-Kuwaitis From The 31 Banned Countries Who Are Related To A Kuwaiti The General Administration of Civil Aviation issued a circular to airlines operating at Kuwait International Airport allowing non-Kuwaiti passengers who have a relationship with a first-class Kuwaiti ... August 09, 2020 0 4610 Category: Travel

Steps To apply for Renewal of Kuwait Society Of Engineers (KSE) Membership And No Objection Certificate Online If you hold a engineer visa KSE membership is must and you have to renew it Every Year, Below we will explain the process about renewal KSE membership and applying NOC, this process is for who already... August 10, 2020 0 4526 Category: Kuwait Society of Engineers

Large Scale Expat Deportation Plan In Progress Planning is underway for the large scale arrest and deportation of around 126,000 expatriates living illegally in Kuwait, reports Al Jarida daily. They did not take advantage of the amnesty in April a... August 11, 2020 1 3982 Category: Expats

Only educated expats over 60 will have their residence renewed Public Authority for Manpower (PAM) has announced that expats at the age of 60 and above, without a university degree will need to make preparations to leave the country by end of this year. They are ... August 11, 2020 2 2939 Category: Expats
Related News
Visit Visa
Visit Visa
View All
Indemnity
Indemnity
View All
Dependent Visa
Dependent Visa
View All
Driving License
Driving License
View All
Project Visa
Project Visa
View All
Termination
Termination
View All
Civil ID
Civil ID
View All
Crime News
Crime News
View All