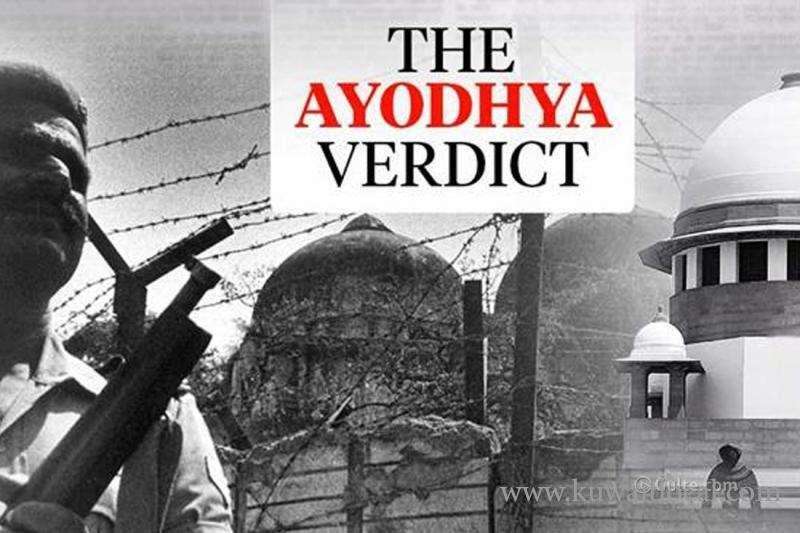 In 134-year-old dispute, perhaps the oldest and most controversial disputes ever in Indian history, Ayodhya dispute is likely to get a final solution today as the Supreme Court is going to pronounce its verdict today at 10.30 AM. Though it is a holiday for the Apex Court, the top court is delivering its crucial verdict on the sensational and controversial case which sentiments of two major religions / faith systems are involved. Chief Justice Ranjan Gogoi and other members of the bench are Justices S A Bobde, D Y Chandrachud, Ashok Bhushan and S Abdul Nazeer will be pronouncing the verdict. October 16, 2019, the Apex bench had reserved the judgement after marathon hearing of 40 days.

Uttar Pradesh Chief Secretary Rajendra Kumar Tiwari and DGP Om Prakash Singh are have made full arrangements to maintain law and order. Heavy para-military, special battalion, police and other security personnel have been deployed in large numbers in Ayodhya in order to prevent any untoward incidents. Drone cameras have been hired to thoroughly monitor the situation. Though peace has been descended on Ayodhya as its people are peaceful and ready to accept the Supreme Court's verdict, the government has taken strict measures as some miscreant groups could rise the tempers and provoke the people. Since sentiment and faith of two communities involved, this is considered as one of the most sensitive cases in Indian history.

What Is Ayodhya Land Dispute?

Simply put, it is about 2.77 acre land dispute between the three parties - Ram Lalla, the Sunni Waqf Board, and the Nirmohi Akhara. The demolition of the disputed Ram Janmbhoomi-Babri Masjid structure on December 6, 1992, sparked a huge communal riots in the country making today's judgement most important and crucial in Indian political history.

The Supreme Court  verdict is going to be out after 14 appeals have been filed in the Supreme court against the 2010 Allahabad High Court judgment, delivered in four civil suits, that the 2.77-acre land in Ayodhya be partitioned equally among the three parties.

Initially, as many as 5 lawsuits were filed in the lower court. The first one was filed by Gopal Singh Visharad, a devotee of "Ram Lalla", in 1950 to seek enforcement of the right to worship of Hindus at the disputed site. In the same year, the Paramahansa Ramachandra Das had also filed the lawsuit for continuation of worship and keeping the idols under the central dome of the now-demolished disputed structure. The plea was later withdrawn. Later, the Nirmohi Akahara also moved the trial court in 1959 seeking management and "shebaiti" (devotee) rights over the 2.77 acre disputed land. Then came the lawsuit of the Uttar Pradesh Sunni Central Wakf Board which moved the court in 1961, claiming title right over the disputed property.

The deity, "Ram Lalla Virajman", through next friend and former Allahabad High Court judge Deoki Nandan Agrawal, and the Janmbhoomi (the birthplace) moved the lawsuit in 1989, seeking title right over the entire disputed property on the key ground that the land itself has the character of the deity and of a "Juristic entity".

Later, all the lawsuits were transferred to the Allahabad High Court for adjudication after the demolition of the disputed Ram Janmbhoomi-Babri Masjid structure on December 6, 1992. The apex court had on August 6 commenced day-to-day proceedings in the case as the mediation proceedings initiated to find the amicable resolution had failed.

It had taken note of the report of the three-member panel, comprising Justice FMI Kallifulla, spiritual guru and founder of the Art of Living foundation Sri Sri Ravishankar and senior advocate and renowned mediator Sriram Panchu, that mediation proceedings, which went on for about four months, did not result in any final settlement and it had to decide the matter pending before it