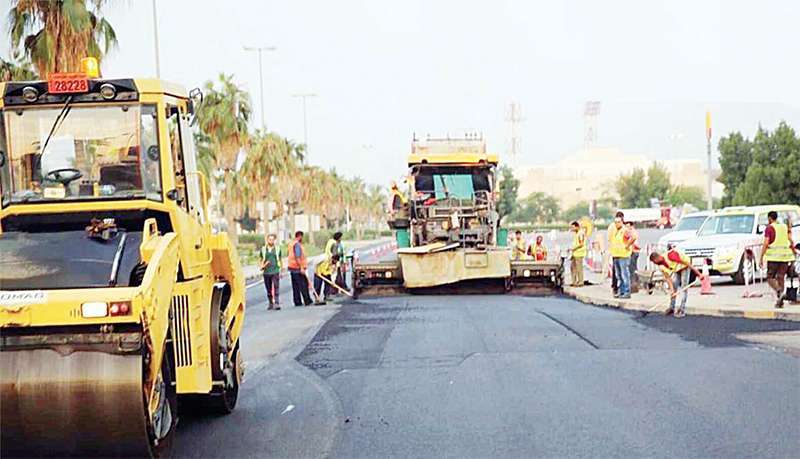 The Public Authority for Roads and Transportation (PART) continues the asphalt pavement works on several highways as per the seven maintenance contracts it signed earlier, in addition to other road works in compliance with the official directive to quickly repair and maintain roads throughout the country, reports Al-Jarida daily quoting sources.

Sources revealed there are four contracts for maintenance works on King Fahd Road – contract numbers 418, 419, 420 and 421 – as this is one of the most vital highways that witnesses high traffic volume throughout the day, considering it serves densely populated residential areas. Sources said this road needs maintenance works and repair of damaged parts, especially the areas affected by heavy rains in November 2018.

Sources affirmed the authority is keen on repairing damages on highways; disclosing the fifth contract (number 324) is for the repair and maintenance of the Sixth Ring Road, the sixth contract (number 398) is for Fahaheel Expressway, and the seventh contract is for the Fifth Ring, Ghazali, Old Jahra roads and others. Sources added the maintenance works on the highways doubled during the curfew period as the authority was keen on taking advantage of the period to complete the maintenance and repair of roads all over the country.

According to official sources, KOC has sent inquiries to the contractors about the previous work they carried out in cleaning the oil-contaminated soil and the most prominent methods used in treatment, in addition to meeting the technical standards in order to consider the offers previously submitted. The company has received bids from contractors for the north Kuwait and south Kuwait contracts for drilling, transportation and processing activities.

The project aims to build two untreatable waste dumps, which include wet oil lakes and dry oil lakes, with the basic capacity of each landfill being one million cubic meters. The objective of the two contracts is to treat about 13 million cubic meters of oilcontaminated soil. The sources affirmed the continued commitment of KOC to preserve the environment, health and safety, and enhance knowledge and understanding of environmental rehabilitation.