Advanced Search
Around 63 Per Cent Of All Traffic Accidents During The Past Nine Months Of This Year Were Caused By Individuals Aged 18-35 In UAE
Category: Kuwait 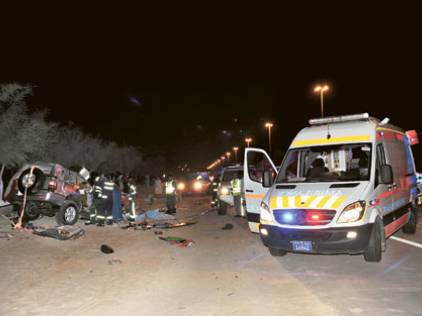 The official revealed some of the main reasons behind these accidents: sudden swerving, failure to leave a safe distance between vehicles, speeding without taking road conditions into consideration, jumping red signals, lack of attention and recklessness.

Meanwhile, the capital’s flashless intersection cameras caught 21,851 vehicles jumping red signals during the same period this year, the ministry said. Officials urged drivers to reduce their speed when nearing intersections and to refrain from attempting to ‘catch’ signals before they turn red. In fact, jumping red signals accounted for 25 per cent of all major incidents during the first quarter of this year, as Gulf News previously reported.

The infrared cameras are capable of estimating a road’s average speed, recording license plate numbers and counting the number of pedestrians crossing the road and are considered one of many smart systems used by the ministry to provide information in real time to the Operations Room. This data can be used to also warn motorists via social media and other platforms in case of road incidents.

Statistics released earlier by Dubai Police stated that over one-fifth of accidents in the emirate were caused by individuals aged 18-25. Ongoing programmes by the ministry aimed at raising the level of road awareness among the youth continue; 53.6 per cent of driving licence holders fall in the 18-30 age group in Abu Dhabi.

These educational initiatives have been condensed and are being transmitted through social media and lectures at universities and other facilities. Other social activities of the ministry also aim to engage the role of families and communities in preventing tragic incidents caused by speeding, jumping red signals and lack of attention on the road, amongst others.

As part of the ministry’s comprehensive plan to limit these incidents, systems to monitor violators at intersections are also being further developed. In May, a decline in the number of accidents during the first quarter of this year in comparison to the same period last year, was reported. This was due to the mandatory enrollment of Emirati youths for military service.

The official also warned against the dangers of failing to check the speedometer when driving on a highway as drivers may lose control over their vehicle. They also must be capable of dealing with emergency situations on the road and driving over the speed limit prevents them from doing so in a timely manner, he said.

Finally, he urged parents to supervise their children and ensure that they follow road laws and to refrain from allowing them to drive if they do not possess the appropriate licence.

Flights To India Awaiting Final Approval Special charter flights to Indian destinations are expected soon with the signing of the Transport Bubble between the two countries, a reliable source disclosed to The Times, Kuwait. It is expected... August 05, 2020 0 15224 Category: Information

The Airport Continues Its Commercial Flights According to Alqabas Kuwait International Airport continued to operate commercial flights for the fifth consecutive day, as 14 flights arrived in the country yesterday, while 16 flights departed. A re... August 06, 2020 0 6118 Category: Travel

2,800 Departures And 1,470 Arrivals Within Two Days According to Alqabas Director of the General Administration of Civil Aviation M. Yousef Al-Fawzan revealed that the agencies operating at Kuwait International Airport have succeeded in implementing th... August 04, 2020 0 5698 Category: Travel

Emirates Gets All Set To Relaunch Kuwait Services Dubai carrier also confirmed Lisbon as another destination being added in this rollout Emirates airline will resume passenger services to Kuwait’s capital from August 5. Flights from Dubai to K... August 05, 2020 1 4572 Category: Travel

KTTAA chairman criticizes abrupt decision to ban expats from 31 countries without prior notice Under the pandemic situation the decision was taken by Kuwait government to ban travel from 31 countries. Today Mohammad Al-Muthairi, the Chairman of the Board of Directors of the Kuwait Travel and To... August 05, 2020 0 4304 Category: International

Travel Packages For Expats Who Are Willing To Return From 31 Banned Countries Considering the current Pandemic situation all over the world,Kuwait has banned travel from 31 countries, so expats cannot return back to Kuwait from banned countries. Travel agencies are taking th... August 04, 2020 4 4161 Category: Travel

Partial Ban Lifting Is Possible, But It Will Not Take Place Today Governmental sources revealed to Al-Qabas that the cabinet will discuss in its meeting today the health indicators of the Corona epidemic and its extent locally and globally, and accordingly will dete... August 03, 2020 0 3534 Category: Coronavirus

3 Stage Plan For Return of Expats - MOI High sources revealed Alqabas  that the return of residents to the country will take place according to 3 successive stages, during which priority will be according to the needs of the state, wit... August 07, 2020 0 2994 Category: Expats

Kuwait – India Agrees To Evacuate 1,000 Indians Per Day Back To India The Indian Government is about to start flights to bring back Indian expats who are willing to come back to India from Kuwait. Regarding this Indian authority had a discussion with the Kuwait counterp... August 06, 2020 0 2658 Category: Travel
Popular Offers