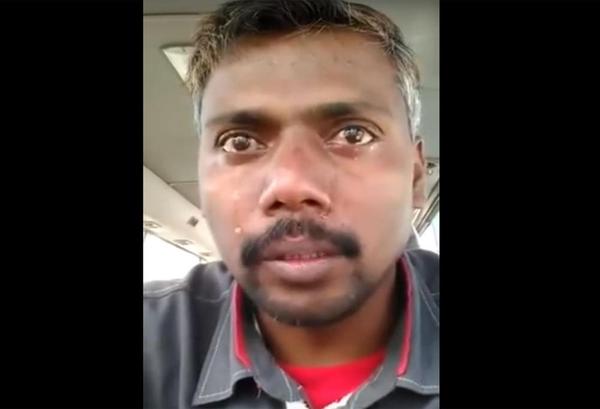 An Indian migrant worker who made an emotional plea on social media about his working conditions in Saudi Arabia has been jailed, according to activists. Abdul Sattar Makandar, a truck driver, made a video which shows him crying in desperation about his situation.

The video, posted to social media by Indian human rights activist Kundan Srivastava, was shared widely in India. Human rights activists now fear for his life. In his video, Mr Makandar says: "I have been in Saudi Arabia for the last 23 months, and have applied for leave to come home over five months ago.

“But my employer is not letting me go home... My employer doesn't give me a proper salary, neither does he give me money for food," he alleged, according to the Huffington Post India. Mr. Srivastava said he later took down the post - which had since been posted widely elsewhere - and apologised to the engineering and construction company, Al Suroor United Group, after approaches from the firm's legal representatives.

He said Mr. Makandar has now been jailed having been initially arrested under a Saudi law which prevents "spreading misinformation" on social media. However, his uncertain status and limited contact with the outside world has greatly concerned activists. “He is still in jail, his life is in danger,” Mr. Srivastava told The Independent. He said he had been in recent contact with Mr Makandar and also visited his family.

Mr. Srivastava, who claimed he was working without help from the Indian government, also said Mr. Makandar had not been charged with any crime. “I urge the Government, Minister of External Affairs Sushma Swaraj, PMO India Narendra Modi to help Abdul Sattar Makandar to come back to India,” Mr. Srivastava continued. “His life is in danger and being Indian, we have a responsibility to help him. I would also like to request that every human being and media to come forward and support us.” The Al Suroor United Group denied Mr. Makandar’s claims, saying all workers were entitled leave after two years’ service and that he was six weeks away from this, the BBC reported.

The Mumbai recruitment agency which hired Mr. Makandar, Discomb Gulf Travels, told the BBC they have seen bank statements that showed he was paid on time and that he should have come to them for help before making the video. The conditions of migrant workers in Saudi Arabia have been criticised by rights groups, who have cited mistreatment, withheld wages, restricted movements and poor living and working conditions. In October 2015, Kasturi Munirathinam, who working as a maid, had her arm cut off by her Saudi employer, leading to calls from some Indians to end the supply of migrant workers to the country.

Foreign workers in Saudi Arabia are subject the Kafala sponsorship system, which severely limits their rights. The Kafala system “grants employers’ excessive power over workers and facilitates abuse,” according to Human Rights Watch. Under the system, it is very difficult for workers to change jobs or leave the country without the permission of their employers.

"We have consistently seen migrant workers too scared to speak out because of reprisals from employers, such as refusing to give an exit permit, not paying wages that are due, or cancelling residency permits," James Lynch, Amnesty International deputy director for the Middle East and North Africa, told the BBC. However, activists welcomed legislative changes in October 2015 intended to hold companies to fairer standards. Al Suroor United Group and Discomb Gulf Travels had not responded to Independent requests for comment at the time of publishing.