Advanced Search
An Indian Court Jailed A Driver Of US Based Ride Hailing Company Uber For Life For Raping A Passenger
Category: Kuwait 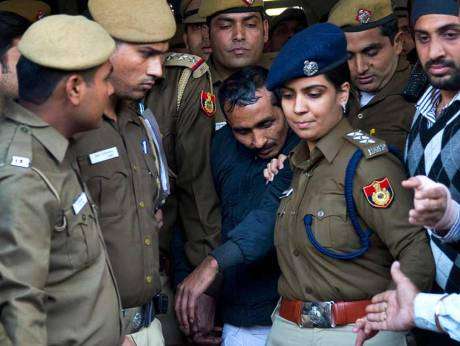 An Indian court on Tuesday jailed a driver of US-based ride-hailing company Uber for life for raping a passenger, in a case that highlighted the dangers faced by women from violent sex attackers. Driver Shiv Kumar Yadav received the maximum sentence after he was found guilty last month of the rape, kidnapping and criminal intimidation of the woman, who had hailed a ride home from a party in Delhi last December.

Yadav got his job with Uber with fake references, enabling him to hide his criminal record. The firm, valued at $50 billion (Dh183 billion) this year, was banned in Delhi as a result and has only recently regained the right to operate after tightening driver checks.

The case revived memories of the horrific rape and murder on a moving bus of a young physiotherapist in Delhi in 2012, which became the subject of a BBC documentary that was banned by the Indian government this year. The authorities fast-tracked Yadav’s trial to meet the public’s demand for swift justice.

“We are happy that justice has been delivered and that the process didn’t take that long,” said Madhur Verma, deputy commissioner with the Delhi police. The victim, a woman working for an international consulting firm, fell asleep on the way home. Yadav then drove to a secluded place and raped her.

Yadav’s lawyer, D.K. Mishra, said he would appeal against the sentence in a higher court. “My client is innocent,” he told reporters after the sentence was passed. The passenger also sued Uber in a US federal court in January, but later withdrew her suit.

Indian authorities face sustained criticism for not doing enough to address a weak system of law enforcement and policing that leaves women vulnerable to sex crimes. Politicians often blame rape victims for the crime committed against them in comments that reflect entrenched patriarchal attitudes in India.

In 2014, 36,735 rapes were committed and nearly 338,000 crimes against women were reported, according to data from India’s National Crime Records Bureau. After the December incident, Uber introduced safety measures and tightened driver checks. A court recently revoked the ban on the company’s services in Delhi.

Last month, the federal government released guidelines to regulate online taxi companies, saying they should do stringent security checks and not contract anyone convicted of a “cognisable offence” under India’s criminal laws.

5 Year Residence For Expats And 10 Years For Expat Businessmen A new residency law will be introduced that underlines that an expat can acquire a residency visa for up to 5 years and for an expat businessman with a valid project, it is for 10 years. Among the ... August 12, 2020 2 6150 Category: Expats

After Days Of Waiting, First Flight Left To India From Kuwait Today After a long wait of more than three weeks, the flight to India resumed from Kuwait international airport today with the first flight carrying 322 Indians stranded here to Delhi. The flight, arrang... August 11, 2020 0 5942 Category: Kuwait

Allow Entry To Non-Kuwaitis From The 31 Banned Countries Who Are Related To A Kuwaiti The General Administration of Civil Aviation issued a circular to airlines operating at Kuwait International Airport allowing non-Kuwaiti passengers who have a relationship with a first-class Kuwaiti ... August 09, 2020 0 4543 Category: Travel

Steps To apply for Renewal of Kuwait Society Of Engineers (KSE) Membership And No Objection Certificate Online If you hold a engineer visa KSE membership is must and you have to renew it Every Year, Below we will explain the process about renewal KSE membership and applying NOC, this process is for who already... August 10, 2020 0 4310 Category: Kuwait Society of Engineers

Only educated expats over 60 will have their residence renewed Public Authority for Manpower (PAM) has announced that expats at the age of 60 and above, without a university degree will need to make preparations to leave the country by end of this year. They are ... August 11, 2020 2 2731 Category: Expats

Deportation of More than 350,000 expats in short term The government developed a plan to address the demographic issues, consisting of many items, which were disclosed in a report prepared by a group of government agencies headed by the Ministry of Affai... August 09, 2020 0 2701 Category: Expats

Ministry Of Health Prepared The List Of Expats Who...