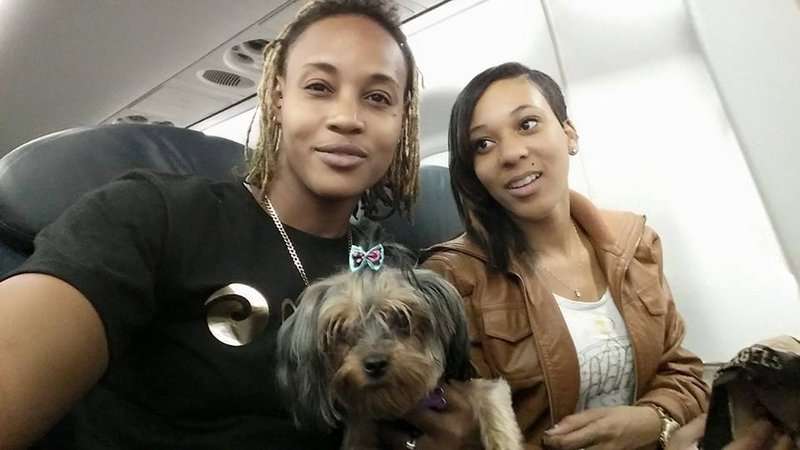 A U.S. army veteran and her partner have been Sentenced to more than 20 years in a Kuwaiti prison for trumped up charges of drug possession, according to her family.

“I believe it really had nothing to do with drugs because they had nothing illegal,” Michelle Jackson said of the sentences handed down to her daughter Monique Coverson and her partner Larissa Joseph. Instead, she believes that the steep punishment was a result of her daughter’s sexuality.

“I do believe it’s mostly their alternative lifestyle in a religious country that is so against same-sex relationships,” she told ThinkProgress in an interview.

According to information Jackson received through a friend of her daughter’s, police stormed into Coverson’s home in May. In a change.org Petition her family created that now has nearly 85,000 signatures, Coverson’s sister Jasmine wrote that authorities fabricated charges after they were found to have K2 — a synthetic form of marijuana that’s legal in Kuwait.

On the morning of May 8, 2015, their house was raided and police confiscated one ounce of a “tobacco-like” substance. It was sent to a lab in Germany for analysis, and  it was determined to be a substance that is completely legal in Kuwait.  Yet, Kuwaiti officials held them in prison anyway. After 8 months of uncharged incarceration,  the one ounce of legal substance magically turned into one pound of marijuana,  and on January 12, 2016, Monique and Larissa were sentenced to 20-25 years in prison.

Coverson’s mother told ThinkProgress that her daughter used drugs like K2 “occasionally,” but thinks the root of the arrest is her same-sex relationship. The 32-year-old was stationed in Kuwait during her years in the army, and then stayed on as a military contractor. Before she was arrested, Coverson worked in the country’s music industry, according to Jackson.

Kuwait has stringent laws against drug use, although even hard drugs are readily Available in the oil-rich nation. At least for men, same-sex relationships are illegal in Kuwait. Consensual sex between two men carries a sentence of up to seven years in prison, although the law makes no mention of same-sex relations between women.

The country carried out a crackdown against LGBT Kuwaitis and foreign nationals in the past, including a sweep that resulted in more than 200 arrests in 2013. Kuwait’s health ministry claimed to be developing a “gay detector test” meant to keep LGBT people out of the country, and MPs rallied against Amnesty International for protecting LGBT people who one former MP said harbored “deviant behavior and attitudes undermine and destroy humanity.”

Aside from one text message she managed to send from a fellow prisoner’s phone, Coverson hasn’t had direct contact with her family since she was arrested in May. Jackson waits on news of her daughter through her friends in Kuwait.

The U.S. government wasn’t aware of the arrests until Jackson reached out to the U.S. embassy in Kuwait to advocate for the release of Coverson and her partner. “The U.S. embassy didn’t even know she was sentenced until I contacted them,” she said, expressing disappointment. “I thought they are supposed to visit U.S. citizens whenever they are in captivity.”

Jackson has since called on supporters to send letters advocating for the women’s release to President Obama and the Hillary Clinton campaign. The Columbus, Georgia-based mother is determined to bring them both home. Through her friend in Kuwait, Coverson told her mother that she loves her and that she shouldn’t give up on advocating for her release. “I told her friend to tell her never as long as I have breath,” Jackson said.