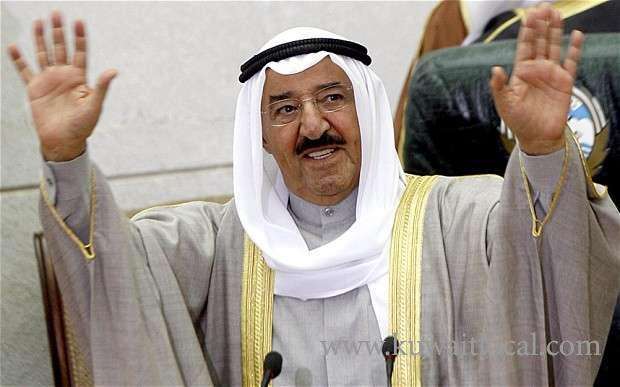 His Highness the Amir Sheikh Sabah Al- Ahmad Al-Jaber Al-Sabah will head to Iraq on Wednesday to discuss bilateral ties and recent regional and international developments. This is the second visit by His Highness to Iraq, with the first being in March 2012 when he headed the Kuwaiti delegation in the Arab Summit in Baghdad.

The visit comes as tension is rising in the region, especially with the recent attacks on oil tankers and commercial ships in Arabian Gulf and the Gulf of Oman. Although the Kuwaiti-Iraqi ties were severed for years as a result of the Iraqi invasion and occupation in 1990, the wise leadership of His Highness the Amir allowed the two countries to resume and boost their relations on all levels.

In July 2013, the Iraqi parliament approved an agreement on forming a joint committee to boost relations and cooperation and resolve issues between the two countries.

In November 2018, Iraqi President Barham Saleh visited Kuwait for the first time after his assumption of power, to hold talks with His Highness the Amir. Moreover, the two visits of former Kuwaiti prime minister His Highness Sheikh Nasser Al-Mohammad Al-Ahmad Al-Sabah in September 2010 and January 2012 paved the way to end the tension between the two countries and start a new level of relations.

The 2010 visit was the first for a senior Kuwaiti official since 1990. Kuwait also played a role in speeding up the approval of the UN Security Council to remove Iraq from Chapter Seven of the UN Charter, which allowed Iraq to regain its sovereignty and economic power. Meanwhile, the two sides exchanged visits by senior officials to boost cooperation in different fields, including investment, media and aviation. The two countries’ cooperation in aviation saw a prominent turn when the first Iraqi Airways plane landed in the Amiri Airport in February 2013.

As for the humanitarian side, Kuwait had donated $1.5 billion in the conference to reconstruct Iraq in Madrid in 2003. It also organized blood donation campaigns and treated injured Iraqis at Kuwait’s hospitals. In 2014, the United Nations Office for the Coordination of Humanitarian Affairs (OCHA) welcomed a generous Kuwaiti donation worth $9.5 million for the UN’s humanitarian organizations to aid Iraq. In 2015, Kuwait donated $200 million to aid displaced Iraqis and it also delivered 40,000 food baskets to displaced families in Iraq’s Kurdistan region. The country also donated $176 million as humanitarian aid during the donors conference for Iraq, held in Washington in July 2016.

After Iraq’s Mosul was liberated from the so-called Islamic State (IS) in July 2017, Kuwait held an international conference to rebuild the liberated areas in February 2018. The conference collected pledges worth $30 billion, with Kuwait donating $2 billion. Kuwait Ambassador to Iraq Salem Al-Zamanan said Tuesday that the historic visit of His Highness the Amir to Baghdad comes to strengthen relations between the two countries.

In a statement to KUNA, Al-Zamanan said His Highness’ visit on Wednesday falls within the framework of mutual visits between top officials of the two countries and as a continuation of Kuwait’s role in supporting the reconstruction of Iraq. Iraq’s Ambassador to Kuwait Alaa Al- Hashemi also said Tuesday that the visit of His Highness the Amir to Iraq is part of boosting bilateral relations.