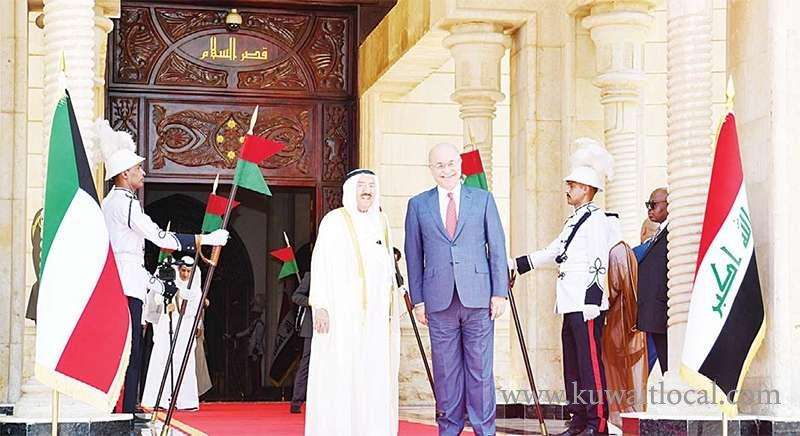 His Highness the Amir Sheikh Sabah Al-Ahmad Al-Jaber Al-Sabah, along with his accompanying official delegation, concluded on Wednesday an official visit to Iraq, amid assertions by top decision makers that the mission was quite significant and fruitful at various levels.

His Highness the Amir was seen off at the airport by senior officials namely President Barham Saleh and diplomats. His visit was distinguished with talks addressing political issues of joint concern and prospects for wider business cooperation.

He stressed on importance of following up with what was agreed on at the meeting of Kuwait- Iraq High Joint Committee at its seventh session in Kuwait last month, and assessing what has been implemented, adding that the common issues between the two sides are on track.

He pointed to the exchange of views on regional and international issues related to the security and stability of the region, and stressed the importance of His Highness’ visit to the brotherly country at such an important time. The visit of His Highness the Amir is the first in seven years. He visited Baghdad to participate in the Arab summit at its 23rd regular session in 2012. The visit comes just one month after Iraqi Prime Minister Adel Abdul Mahdi’s first visit to Kuwait.

Relations between Iraq and Kuwait have made great strides forward, thanks to the wisdom and desire of the leaderships of the two countries to “overcome the remnants of the past,” said Saleh during summits talks with His Highness the Amir and his accompanying delegation.

The Iraqi president affirmed that Iraq is keen to build advanced relations with its neighbors in general and Kuwait in particular, a presidential statement said. Iraq is looking at the nature of the current crisis in the region with a broad perspective to achieve a comprehensive regional consensus based on dialogue and good neighborliness among countries, the Iraqi president added.

The Iraqi president expressed hope that the Amir’s visit would be a good opportunity to start a constructive relationship between the two neighbors. His Highness the Amir arrived in Iraq Wednesday on an official visit, which is his second after his visit in March 2012 to attend the Arab summit.

His Highness the Amir met during his visit with Saleh at the Al- Salam Palace in Baghdad. During the meeting, they reviewed the good brotherly relations between the two countries and the two brotherly peoples and means of enhancing them. The talks also dealt with issues of common concern and the latest developments on the regional and international arenas. His Highness the Amir received Speaker of the Iraqi parliament Mohammad Al-Halbousi at the Iraqi government palace in the Iraqi capital.

Meanwhile, Iraqi Oil Minister Thamer Al-Gadhban praised directions of His Highness the Amir to overcome obstacles facing bilateral cooperation between Kuwait and Iraq. This came after the official talks held in Baghdad earlier Wednesday between the Iraqi president and His Highness the Amir.