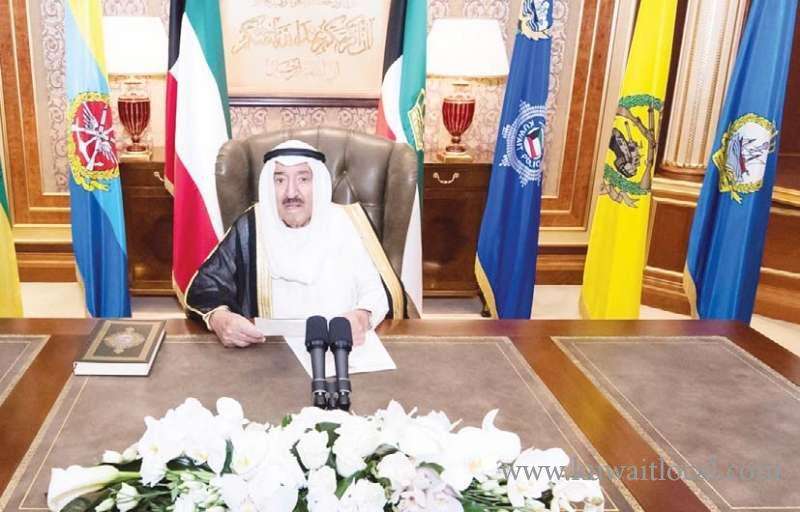 His Highness the Amir Sheikh Sabah Al- Ahmad Al-Jaber Al-Sabah underlined Monday that the delicate situation in the region requires cautiousness and social unity to retain the state’s security and people’s safety.

“The bitter reality of the region, it’s dangerous dimensions and consequences, and the developments taking place in the region calls upon us to realize the current situations and circumstances, be cautious and ready to confront them in order to protect the safety and security of our dear country,” His Highness the Amir said in a speech on the occasion of the last ten days of the Holy Month of Ramadan. His Highness the Amir emphasized the importance of national unity in protecting the country in this turbulent time.

“This will not be achieved but through cohesion and adherence to our national unity, which we will never allow to prejudice. It is the protective wall after God for the homeland, that protects it from the woes that plague other countries,” he stated. His Highness the Amir stressed the need to strengthen the internal front and stand up against anyone who tries to stir up strife, or tamper social coherence. He pointed to the pivotal role of the GCC in countering dangers and overcoming regional challenges. “We assure that sticking to our Gulf community and keeping the privileges we have achieved within the frame of the GCC is the security that enable us to face such dangers and challenges.”

His Highness the Amir reminded all Kuwaitis that “Our homeland is entrusted to us all, and this requires everyone to be faithful and loyal, and to work diligently, earnestly and sincerely to advance it and push its development process towards its desired goals”.

He stated every Kuwaiti have to be proud of Kuwait’s internationally-appreciated stances and efforts to enhance international peace and security.

“You should be proud, brothers and sons, with the elite position of Kuwait – thanks God – in the International Community, with its achievements in Humanitarian, relief and community work, and its active participation in the efforts aiming at keeping international peace and security, and spreading the culture of tolerance and peace,” “These achievements were, and still are, subject of praise and well acceptance, and even honor, which I consider as an honor to the entire people of Kuwait,” he said.

His Highness the Amir affirmed the need to abide by the democratic approach to guarantee the state stability and security. “We have to adhere to our national achievements, our firm democratic approach, which we have chosen and which is inherited by the people of Kuwait, and to our comprehensive and complementary Constitution, which we always affirm and protect, and shall not allow its prejudice as it is the real guarantee of the stability of our system and the main pillar of the security of our country, and the source of pride of our just and fair judiciary system,” he said.

His Highness the Amir called for constructive cooperation between the State’s legislative and executive powers. “I avail this opportunity to reassure the importance of fruitful and constructive cooperation between the legislative and the executive powers to strengthen the state of institutions, rule of law, continuing the desired course of development and reform, completing the consideration of the submitted draft laws, and implement the economic programs aiming at the diversification of national sources of income, and creating productive job opportunities for the young people to participate in pushing forward the wheel of development, and enhancing the Non-oil revenues,” he said. His Highness the also called on all those in charge of the media to play their role consciously and responsibly.

“We do not want our media to divert from its national message to what threatens the unity of the homeland and its social security, especially under the critical circumstances in the region, “We look forward that our media be the light of civilization, a tool to advance construction and development efforts, a platform for responsible freedom, and informed public opinion,” he stated. His Highness the Amir, however, lamented that some misuse social media to spread rumors and hatred.

“Unfortunately, what we see and experience is the misuse of social media, which have often become tools of demolition and questioning of intentions, and spreading the spirit of hatred and hatred among members of society,” he regretted. His Highness the Amir highlighted His and the government efforts to empower youth and increase their contributions to the state building and society development.

He noted that he has repeatedly stressed, on several occasions, that youth is the true wealth of the nation, and that they have both His attention and the attention of the Government, as they are the most precious of our wealth, and the best investment, “Since the first Youth Conference in 2013 under the slogan “Kuwait hears” the government has studied the important recommendations issued by it, accelerated their implementation, and took measures to enable our youth to develop their capabilities and skills, address their issues, and overcome the obstacles they face, “As a follow up to these efforts, Al-Diwan Al-Amiri recently launched the Kuwaiti Youth Project under the title “Kuwait is proud” which aims to honor and nurture this promising generation and enable them to contribute to the national responsibility of participating to the development process to build the present and future Kuwait,” he said.

His Highness the Amir also recalled his initiative to establish the National Center for Innovation, through which to develop the ideas and innovations of young people, and turn them into projects of economic feasibility for their benefit and the benefit of the country. “You young people, as I said on more than one occasion, are the source of hope,” he concluded.