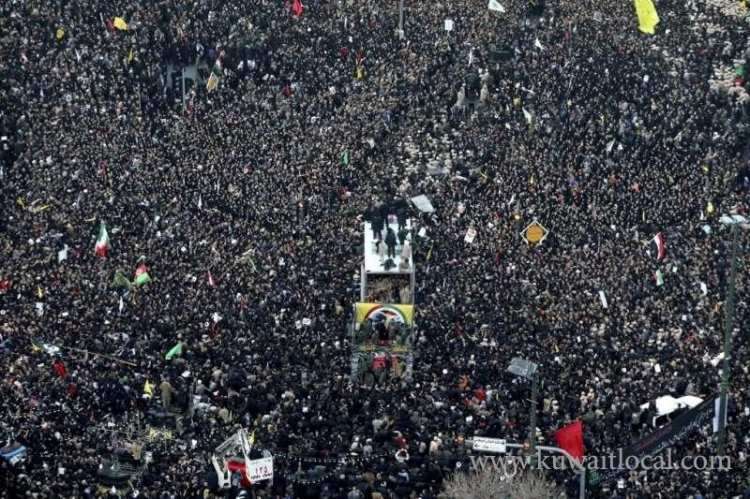 Coffins of Gen. Qassem Soleimani and others who were killed in Iraq by a U.S. drone strike, are carried on a truck surrounded by mourners during a funeral procession, in the city of Mashhad, Iran, Sunday, Jan. 5, 2020. Soleimani’s death Friday in Iraq further heightens tensions between Tehran and Washington after months of trading attacks and threats that put the wider Middle East on edge. (Mohammad Hossein Thaghi/Tasnim News Agency via AP)
Although a number of Kuwaiti political science professors have emphasized that “the killing of the Iranian Major-General in the Islamic Revolutionary Guard Corps (IRGC) Qassem Soleimani was a pre-planned strike,” they all stress Iran at some point will respond, but have ruled out an all-out war, reports Al-Rai daily.

Professor of political science at the Kuwait University Dr Shamlan Al- Essa confirmed the death of Qassem Soleimani is a long-term blow, and the decision was taken last week after US President Donald Trump met with the senior officials of his government and US national security personnel.

Al-Essa, in a statement to the daily said “the killing of Soleimani will help the Iraqi national forces to form a new government and implement real reforms inside Iraq away from the Iranian pressure.” For his part, professor of political science at Kuwait University Dr. Shafiq Al-Ghabra stressed that the killing of Qassem Soleimani in this way is in the interest of the Iranian regime, noting that “over the past few months there were demonstrations in Lebanon and Iraq calling for greater independence from Iran, but through this operation Iraq was introduced to the regional polarization between the United States and Iran, and this will change the role of the masses and highlight the scene of polarization.

Al-Ghabra said in a statement to Al-Rai the door of confl ict has opened wide and Iran will respond, and what is happening today is related to the confl ict that started with the nuclear file. “I do not see a large scale war but rather future clashes, and the Gulf states will be calling for calm and restraint,” he added.

In the same context, political science professor Abdullah Al-Ghanim confirmed in a statement to Al-Rai that Trump is seeking with the approaching of the US elections, to gain some points in the Middle East, and therefore the death of Soleimani was aimed to weaken the Iranian axis inside Iraq, and he may want to satisfy the organizations inside America that support Israel.

He added, “The killing of Soleimani is a devastating blow to Iran because he was the mastermind and effective agent in Iran’s achievements related to its expansion in the region. He is like the hand that ran the Iranian proxies in the region, be it Hezbollah in Lebanon or the Houthi group in Yemen or the militias in Iraq because Soleimani was the coordinator between them and the Iranian leadership.

Professor of political science, Dr. Abdullah Al-Shayji said the Trump administration seeks to activate a strategy that deters Iran from carrying out a massive retaliatory response and to deliver a clear message that it will incur heavy losses if the response exceeds the ceiling in retaliation for the assassination of Soleimani.

He pointed out that an important part of the crisis-management cell in a region witnessing crises and tensions is the activation of diplomacy of mediation and appeasement, and employing good relations and confidence-building factors between the two parties to the crisis to reduce escalation.

George Irani, a professor of political science at the American University of Kuwait expressed fears of an Israeli strike against Hezbollah in Lebanon in the wake of the killing of Soleimani.