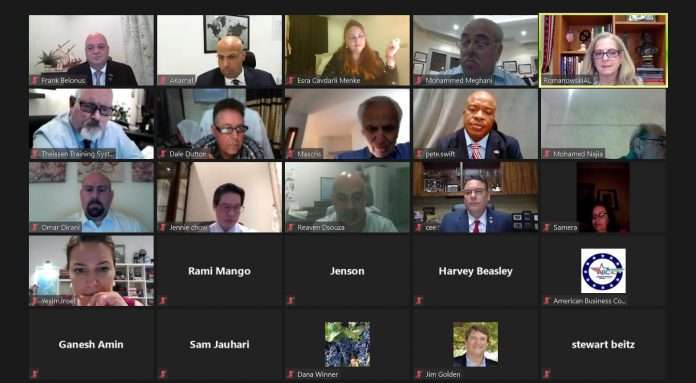 The American Business Council- AmCham Kuwait (ABCK-AmCham Kuwait) held its signature Town hall on Tuesday, 22 September.  Over 60 people tuned into the virtual event, including guests from the ABCK-AmCham Kuwait community, US Embassy, and non-members from across different industries in Kuwait. In his opening statements, ABCK- AmCham Kuwait’s Chairman, Mr. Frank Belonus, greeted all attendees: “welcome to our Townhall Event and a special welcome to our Ambassador, The Honorable Alina L. Romanowski, this evening”. He then gave an overview of the event agenda and introduced ABCK-AmCham Kuwait’s Board of Directors. Following that, Belonus discussed the various Focus Groups within ABCK-AmCham Kuwait and invited members to play an active role and join any focus group of interest.

Following that, Guest of Honor, Ambassador Romanowski took to the virtual stage addressing the guests. She said, “For the past 35 years, AmCham Kuwait has played a vital role as the voice of the American business community in Kuwait. I’ve had the honor of speaking to AmCham Kuwait’s leadership and members at several virtual engagements throughout the COVID crisis.  During our conversations, we discussed the importance of establishing and fostering strong relationships between our two governments and the business community in the US and Kuwait to improve the bilateral trade and investment relationship.”

She then discussed the importance of economic diversification and various opportunities in different industries, emphasizing the bilateral trade between Kuwait and the US and how together, both organizations work to improve the business environment and increase the overall trade relationship.

After that, Mr. Belonus introduced the guest speaker, Mr. Cee Freeman, Vice President of the National Desert Storm Desert Shield. Mr. Freeman then gave a presentation, discussing in detail The National Desert Storm and Desert Shield Memorial in Washington D.C. which will stand as a remembrance of the important events which took place in 1990 and 1991.

“Our mission is to build this by the end of Veterans Day 2021 to commemorate and honor those members of the armed forces who served on active duty in support of operation desert storm and desert shield,” said Freeman. He highlighted how the goal is to break ground on the Memorial in February 2021 to coincide with the 30th Anniversary of the Liberation of Kuwait, reiterating how The National Desert Storm War Memorial is deeply honored to receive this support from the State of Kuwait.

Then, Mrs. Esra Cavdarli Menke, ABCK-AmCham Kuwait Executive Director, introduced Mr. Rachad Abdallah, ABCK-AmCham Kuwait Chair of Membership Committee, and President of Honeywell Kuwait, Qatar, and Iraq. Mr. Abdallah provided a briefing on membership and policy updates such as the Member-to-Member Benefits Program, MENA amCham Benefits, and the Chamber’s various initiatives to connect corporate members. “One of our initiatives was to provide a grace period from February to September to those members in the hospitality industry who hadn’t paid their dues, and allowing the rest of the corporate members to pay in installments in order to ease the financial burden,” said Abdallah.

He then concluded his remarks, encouraging attendees to learn more about ABCK-AmCham Kuwait as new members are always welcome: “If you know anyone who would like to join our chamber of commerce, please let us know, and we’ll be happy to contact them”.

Mr. Pete Swift, ABCK- AmCham Kuwait Vice Chairman and Events Committee Chair, then, presented an overview of events and programs over the past year. On his part, Swift talked about past events and highlighted some of the events that ABCK- AmCham Kuwait has in store for 2020.  “We have been doing several online webinars since the pandemic, in collaboration with several members as well as different AmChams across the GCC. We will keep on doing webinars until the situation has settled enough, and we can meet in a physical space,” said Swift.

He elaborated on some of the webinars held recently, emphasizing how the “main goal for these webinars was to educate/inform the public during this time, as several of these topics tackled questions that many of you had in mind, such as the laws at the beginning of the pandemic, financial support and the central bank’s actions, the economy across the GCC and what we may be seeing in the future”.

Following that, Swift handed over the virtual stage to Mr. Akram Kamal, ABCK-AmCham Kuwait Chair of US-Kuwait Liaison Committee, who discussed in detail the latest updates from the US -Kuwait Liaison Committee. Mr. Kamal elaborated on different events and projects the committee organized such as roundtable with U.S. Undersecretary of State to discuss challenges of American businesses in Kuwait, a White Paper submitted to Kuwaiti Government and the US, and participation in various discussions with US Chamber of Commerce.

After that, Mrs. Esra Cavdarli Menke, ABCK-AmCham Kuwait Executive Director, presented members with a briefing on the Chamber’s activities and achievements over the past year. “Although we have had to take difficult measures due to the COVID-19 situation, not being able to host any physical events, we have been working hard to continue providing our members with the best,” said Menke.

She then elaborated discussing how “over the past year, we had 14 companies participating in the Member to Member Program, 33 events and webinars, and 500+ new corporate and individual members”.  She then concluded the session with Q&A where guest speakers responded to questions submitted by the attendees regarding the event, business concerns, and ABCK-AmCham Kuwait.

ABCK- AmCham Kuwait is a non-profit organization comprised of American corporations, small and  medium sized companies, and prominent business leaders and entrepreneurs, both American and Kuwaiti. Since 1985, the American Business Council- AmCham Kuwait has acted as an advocate for American companies in the State of Kuwait.