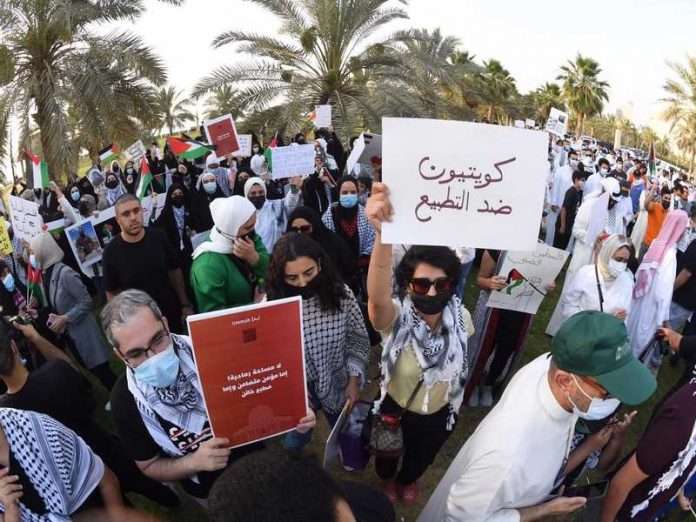 Hundreds of citizens and expats gathered this afternoon on Wednesday, at Al-Erada Square, a public gathering square in Kuwait City in a show of solidarity and expressing their support for the Palestinian cause, and to decry the violence the Palestinians are subjected to under the Israeli occupation, Al Rai daily reported. Israel has been conducting strikes on Gaza for 10 days with the Palestinian death toll rising, while International pressure is mounting for a ceasefire.

In preparation for the sit-in, the Ministry of Interior (MoI) had imposed a security cordon around the square, and closed the Gulf Street and the secondary roads leading to it, as part of strict measures before the crowd arrived.

The participants were responding to a call announced yesterday for a peaceful sit-in to show solidarity in support for the oppressed in Palestine.

MoI had stressed that the law allows for freedom of expression and assembly in solidarity with the Palestinian cause and the crimes that the brotherly Palestinian people are exposed to at the hands of the Israeli occupation forces, but it must be done in accordance with the law.

In a previous statement, it explained that unauthorized gatherings are against the law, “something that the ministry will never allow.”

And it called upon all citizens and expats to fully adhere to the law and the rules of public security, stressing that it will take legal measures against those caught violating the law.

A member of the Political Bureau of the progressive movement of Kuwaiti Hamad Al – Ansari said the Kuwaiti people recall the Iraq invasion and occupation, so their position will never change from supporting the Palestinian cause.