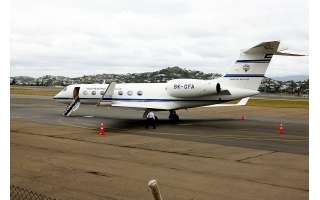 The commission of inquiry set up by the Deputy Prime Minister and Interior Minister Sheikh Mohammad Al-Khalid to investigate the issue of ‘security breach’ concerning the infiltration of Indian newcomer Madhu Sudhan into the aircraft of the Undersecretary of the Ministry of the Interior at the Amiri Airport has completed its investigation, reports Al-Rai daily.

Sources familiar with the issue said the Commission has filed a comprehensive report to Minister Khalid. The report includes all interrogation statements and testimonies of all those involved in the case.

The source said according to the investigations the Indian worked as a cook for the National Guard, but he offered his resignation some time ago. He was earlier working in one of the security firms and the investigation also showed that he worked for ground services at the airport, which enabled him to have friends among the current staff at the airport.

The source added the Indian claimed he wanted to emigrate to America and admitted that he was stopped by a security man at the airport as he was about to enter the passengers area because he did not carry a ticket.

The source pointed out the suspect then disclosed his travel plan to one of the Indian friends and the latter told him about the security delegation that was leaving Kuwait and said it was the best opportunity to board the plane without scrutiny or the need for a ticket.

The source said the friend helped him enter the airport through a separate gate of the VIP lounge and then proceeded to the plane a few minutes before the aircraft took off.

The source explained Madhu was able to enter the hall without scrutiny after the military guard thought he was in charge of facilities for guests or members of a security delegation and as such did not draw much attention. The source indicated that the investigation involved the ceremony departments — managers and operations at the airport security and a number of officers responsible for the security measures

Expats Leaving Kuwait Creates Tremor In Real Estate While the airport is crowded with people departing the country and some areas in the country are still under isolation, several real estate buildings are starting to empty. This has become a familiar ... June 30, 2020 0 14478 Category: Expats

India Bans 59 Chinese Apps Including TikTok, Helo, WeChat The government has banned 59 Chinese applications including top social media platforms such as TikTok, Helo and WeChat in order to counter the privacy security posed by these appli... June 29, 2020 0 5607 Category: India

Public Expats To Go … Not Doctors And Nurses Senior government sources said in exclusive statements that Civil Service Commission has only two years to reach the ratios approved in 2017 concerning the plan to replace expatriates with Kuwaitis in... June 29, 2020 0 4998 Category: Expats

120 To 130 Flights Daily From 1st Aug – PCR Test For Incoming Passengers The Council of Ministers approved operation of commercial flights for arrivals and departures from Kuwait International Airport starting from 1st August, with an operations of not more than 30% in the... June 30, 2020 0 4487 Category: Kuwait

600,000 Dinars Spend At Shopping Malls On First Day After Re-open Heavy sales witnessed in shopping malls and commercial centres on the first day of the second stage of return to normalcy after around 110 days of closure. According to the Automated Banking servic... July 01, 2020 0 3915 Category: Lockdown
Popular Videos