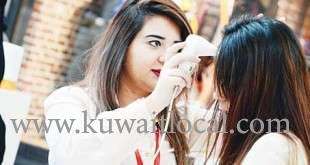 A study conducted by the Dean of the Faculty of Social Sciences at the Kuwait University and the family and adolescence consultant Professor Hamoud Al-Qashaan revealed that 90 percent of Kuwaiti females are dissatisfied with their selves after undergoing cosmetic surgery, reports Al-Rai daily.

“This study, which was carried out about two months, is trying to investigate the motives for resorting to plastic surgery or skin care services,” said Al-Qashaan, who described the study as “Post Cosmetic Operations Syndrome”, resulting in silent depression. He added, most of the reasons are related to relationship or desire to marry on the one hand or ‘save’ the existing marriage.

He said about 1,214 participation of women in Kuwait have resorted to cosmetic surgery and the main reason is following up images and news of women celebrities and their images make Kuwaiti women less satisfied and feel the urge to change their appearance in a quest to imitate others.

Licensed
“The number of women’s salons licensed by the Ministry of Commerce in Kuwait has reached 2,300, while the number of medical licenses for cosmetic surgery clinics has exceeded 151, mostly in private hospitals and clinics.”

“The majority of the cosmetic operations used by Kuwaiti women were of a simple type, not the one requiring hospitalization,” he said. He added, “64.7 percent confirmed that they do not require services from a specialist medical device, but can be done by a so-called cosmetic expert.”

“The sensitivity of women to society is the first reason to look for cosmetic means to stay young, not to get close to aging,” he said. The study noted that “a large amount of consumer processes are associated with cosmetic operations, where it confirmed that 61.5 percent had spent the equivalent of a quarter of the monthly salary on cosmetic matters, while 71.3 percent of the sample revealed their visit to surgical or cosmetic clinics, which shows that cosmetic surgery has become a luxury rather than a medical necessity, and that most of them go to beauty salons at least once a month or less than a month.