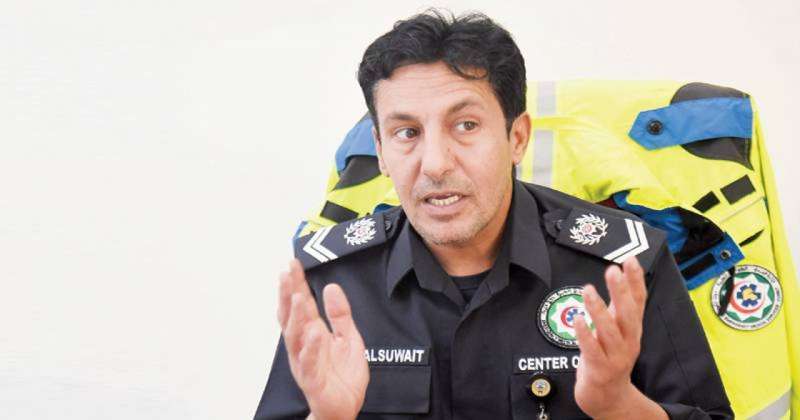 The percentage of cases received by the Jleeb Ambulance Center increased to more than two times during the two quarantine weeks compared to what was before them, where daily cases and sick reports are recorded between 75 and 90 cases, after it received no more than 20 reports, and during the two weeks it dealt with 1000 cases Among them, about 800 suspected cases of coronavirus.

Yesterday, Al-Qabas Toured in the Jleeb Al-Shuyoukh area revealed that the medical teams dealt with many cases, as the Ministry of Health and the Medical Emergency Management provided 6 ambulances to the Jleeb Center with 13 employees in one shift.

Al-Qabas learned from the paramedics staff there, during their two-week treatment, with a thousand cases, and 80% of them reported suspected cases of coronavirus infection, or were in contact with infected people, and were transferred to quarantine centres or designated hospitals.

The percentage of reports received by the Jleeb Ambulance Center increased to more than two times during the two quarantine weeks compared to what was before them, where daily cases and suspected cases are recorded between 75 and 90 cases, before it used to receive not more than 20 cases, and during the two weeks it dealt with 1000 cases Among them, about 800 suspected cases of coronavirus.

He stated that the Jleeb ambulance center is now considered one of the centers that dealt with the most daily cases, where yesterday and during less than 4 working hours, 20 cases were recorded, while daily cases reach 91 cases and not less than 75 since the beginning of the crisis.

Al-Suwait indicated that the center also deals workers in violation of the law of residence in cooperation with other state authorities, and points have been set within them to assess sick conditions and the extent of their need for an ambulance to transport them to medical centers, given that some of them can be transferred by other vehicles or treatment on site.

Al-Suwait pointed out that there are two health centers that are dealt with as well and receive communications from them within the region, one for volunteers and another for the Ministry of Health, noting that the Jleeb Center is separating any papers related to cases of Covid 19 infections outside the center to ensure that the infection is not transferred within it.

Jleeb Ambulance Center follows the highest methods of maintaining sterilization of workers, the building and mechanisms, and the use of high-quality medical gloves and masks to avoid the transmission of infection in addition to physical protections to maintain the safety of workers who work from 5 am until 5 in the evening.

Paramedics at the Jleeb Center sterilize the mechanisms after dealing with cases of people who have contact with and suspected of being infected with the virus, with the necessary materials and tools to avoid any infection, as the process takes approximately 25 minutes.

Medics pointed out that many of the cases that come to the ambulance center are related to a panic or fear of infection with the virus by the residents of the area and when they arrive at the case it turns out that it is far from being infected, but it is dealt with according to the rules and transferred to the center assigned to the surveys to ensure .