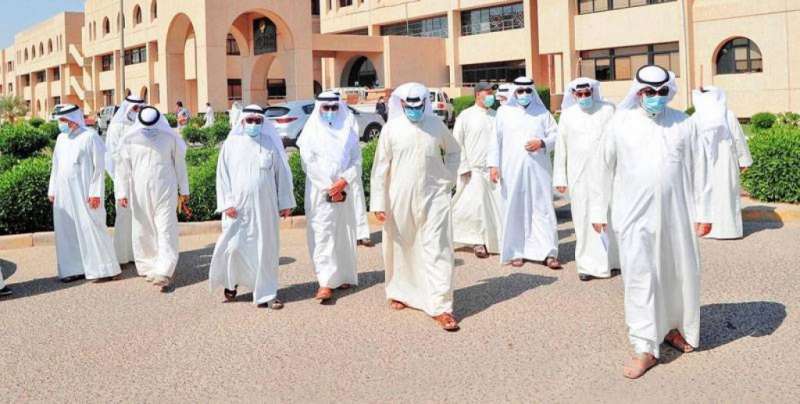 A number of owners of domestic workers’ recruitment offices staged a sit-in on 25 October in front of the Ministry of Health building, requesting the restarting of recruitment and to obtain entry visas for domestic workers that stop the losses incurred by about 420 offices, which reached about 7 million dinars since the beginning of the coronavirus crisis, due to the suspension of recruitment, Al Qabas daily reported. This would also fulfill the requests of despairing Kuwaiti families.

Munir Al-Osaimi, the owner of one of the offices, presented details to the daily regarding the losses of each office separately, which reach KD2, 000 dinars per month, and includes rents, salaries of employees, car installments, foodstuffs for housing and miscellaneous items. The number of domestic workers’ offices was about 420 offices. Calculating the total losses, depending on what Al-Osaimi says, they amount to KD840,000 per month, with a total of KD6,720 million dinars in losses since the beginning of the crisis.

Al-Osaimi states that the sit-in aims to deliver the offices’ demands to open entry visas for domestic workers, before resorting to the judiciary, especially after the offices incurred many financial losses.

He pointed out that a number of Kuwaiti families are suffering problems due to halting the recruitment, and turning to the abundance of illegal domestic workers who are in violation of the residency and labor law, and families are forced to fork over huge sums of money as a consequence of the rise in prices in the black market.

The demands of the protesters, according to Al-Osaimi, are to restart entry visas for domestic workers and facilitate their return to the country in accordance with the necessary health requirements, in addition to meeting with the health committee concerned with the pandemic, for coordination towards formulating a health plan for domestic workers.

Pointing out other losses suffered by Kuwait Airways and others as a result of suspending the entry of workers, Al-Osaimi said that office owners are now facing demands from property owners to pay their rents, or resort to the judiciary, and families are in dire need of domestic workers. He hoped that the health authorities understand their demands, and allow for the workers to come, albeit gradually.

Mubarak Sharar asserts that office owners receive many calls every day regarding when workers from abroad will arrive in Kuwait, but are unable to provide an answer, but rather it falls on the Ministry of Health. He stressed the need to take into account the interests of more than 420 offices and thousands of Kuwaiti families, as there are few coronavirus infections among workers, given that they are present almost all day in citizens’ homes. Proffering a solution, Sharar stated that if the door to entry is opened for workers, it is possible to allocate special places for quarantine for a period of two weeks, determined by the health authorities.

Continuing, he stresses that the owners of offices, Kuwait Airways and the commercial sector have been greatly affected by the coronavirus crisis and the suspension of entry visas.

Pointing out that some Gulf countries have already permitted entry of domestic workers, Office owners also emphasize the need to find alternative solutions to recruiting domestic workers, especially since the coronavirus crisis may extend for a long time, and therefore the country must adapt to the situation, according to health requirements and a gradual return to stages to normal life.

The suspension of entry visas for domestic workers, according to the protesters, has raised the prices of illegal domestic workers, who are in violation of labor law, pointing out that the salaries of some of them reach 400 dinars, which is a high rate, compared to their salaries in the offices.

The speakers stressed that there is a large segment of the elderly, people with special needs, and children affected by the suspension of entry visas of domestic workers, especially as some of the existing workers are nearing the end of contracts, which may prompt a stronger dependence on more illegal domestic workers in the event that the entry visas are not permitted.