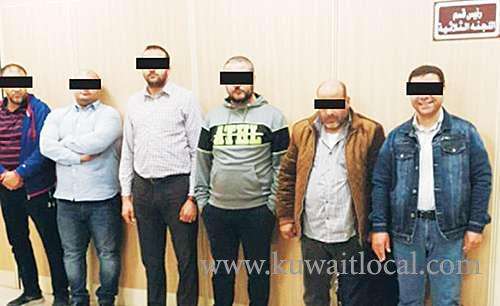 Director of the Labor Inspection Department Mohammad Al-Ansari said five teachers from a private school and a professor of the Kuwait University have been arrested for violating the labor law, reports Al-Anba daily.

This is in addition to a number of others who did not have prior permission to teach in Kuwait.

This happened during a campaign which was launched by a Joint Committee formed by the Council of Ministers to fight the phenomenon of private tuition. The campaign targeted a number of cafés in the Capital Governorate taking into account the approaching exams in the first half of the academic year.

Al-Ansari added such seasonal campaigns come within the framework of the committee’s interest in the future of the students, especially in light of the exploitation of the situation by some people.

The daily added, most suspects take advantage of the situation. This phenomenon has become rampant. Most of the ‘teachers’ give tuition without obtaining prior permission or do not have a university degree to qualify them to teach.

The committee has initiated legal action and handed over those who have been arrested to the concerned authority and punishment may include deportation and the closure of the file of their sponsors.

It has been widely reported, that engineers and employees on government contracts offer private lessons to university and schools students inside cafés for money which ranges between KD 20 and KD 40 per hour, but the remarkable thing is that a number of them teach students without university degrees which does not qualify them to teach the students.

Hike in allowances: The Military Regulations Committee comprising members from the Ministries of Defense, Interior, the National Guard and the Kuwait Fire Service Directorate has completed a study on the issue of hiking the allowances for all military personnel by a minimum of about 150 dinars and a maximum of about 800 dinars, reports Al-Anba daily.

A familiar source told the daily, the proposed increase in allowances has been completed and approved by the Committee, and was referred to the Secretariat of the Supreme Defense Council headed by the First Deputy Prime Minister and Defense Minister Sheikh Nasser Sabah Al-Ahmad.

The increase in the allowances constitutes a catalyst for action and motivation for citizens to join those sectors to serve their country and to ensure its security and stability.

In another regard, the source quoting an official from the committee said it has been recommended that all military personnel who have spent years in the military service and the judiciary will receive financial concessions on retirement, which were adopted since 2009, until 2014, and is subject to a fixed time and allows all military personnel to benefit from it whenever they wish.

The source reiterated that the re-activation of the decision to retire and the adoption of new allowances require discussions with the Ministry of Finance and adoption by the Council of Ministers.

It is noteworthy that the decision on retirement included: granting of an extraordinary pension for the military in the four sectors (army, police, National Guard and fire), pursuant to Article 14 of Law No. 69 of 1980 on pensions and pensions for military personnel.