<![endif]-->
Advanced Search
4 Million People In Kuwait Prefer Driving Their Own Cars Over Getting On Buses And Taxis
Category: Driving License 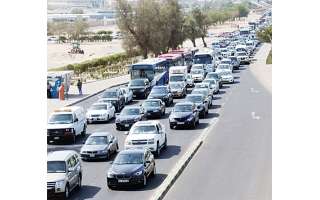 The worst nightmare that a road user could experience is being caught in an unyielding and unmerciful traffic congestion that might delay arrival to any certain destination. It has been a long troublesome issue affecting people in Kuwait and the question still remains, How to solve this problem? Some individuals blame it on owning an increasing number of private vehicles.

Some point fingers at other people, saying that they are violating traffic laws which in turn leads to accusations of being the source of “all the problems in the world”. As seen in several developed countries, public transportation has always played a key role in having less traffic congestions as well as less cases of “road rage”.

Kuwait joined the bid in promoting public transportation back on Sept 20, 1962 with the establishment of the Kuwait Public Transportation Company (KPTC), but despite that fact, the problem still exists.Speaking to KUNA, executive at KPTC Abdullah Al-Nasser said that many people use public transportation to get by in Kuwait, but in recent years the number of users dwindled

Figures
Looking at the number of bus tickets sold by KPTC alone in 1989, there were as much as 121 million tickets purchased in that period, said Al-Nasser who compared the number to the 2014 sale figures from three public transportation companies. Only 100 million tickets were sold last year, indicated Al-Nasser. This is an alarming statistic, said Al-Nasser, adding that some 4 million people in Kuwait, both nationals and expatriates, prefer driving their own cars over getting on buses and taxis.

Since KPTC establishment till the late 1980s, the trend in using public transportation was heading upwards with 15 to 16 percent of the population, he said, comparing that with the current weak percentage which is around five to six. Despite the private sector venturing into public transportation with modern and air conditioned buses and taxis, people are still avoiding public transportation, said Al- Nasser. The increasing number of cars, old infrastructures and roads, as well as other problems translates to the never-ending traffic congestions that people experience nowadays, said the official.

Reflecting different opinions on the issue, citizens Faisal Al-Abdullah, Meshal Hamad, Anoud Al-Saleh, and Abdullah Bandr said that promoting public transportation as the only solution to the problem camouflaged the real reasons for the dilemma. They said that to make public transportation accessible for citizens, the government and companies should work on upgrading transportation services, impose restrictions on owning private vehicles, and find means to shorten the time period for trips taken by buses and other public transportation methods. For better or worse, public transportation might not be working as it should be in Kuwait but this does not deter the fact that the world is benefiting from such solution. As a commemoration to the effectiveness of public transportation, the world celebrates this method on Sept 22, with many nations encouraging its people to leave their cars at home and use buses, trains, and subways to move from one place to another