<![endif]-->
Advanced Search
4 Firefighters Were Injured In A Fire That Gutted 9 Shops In Mirqab
Category: Information 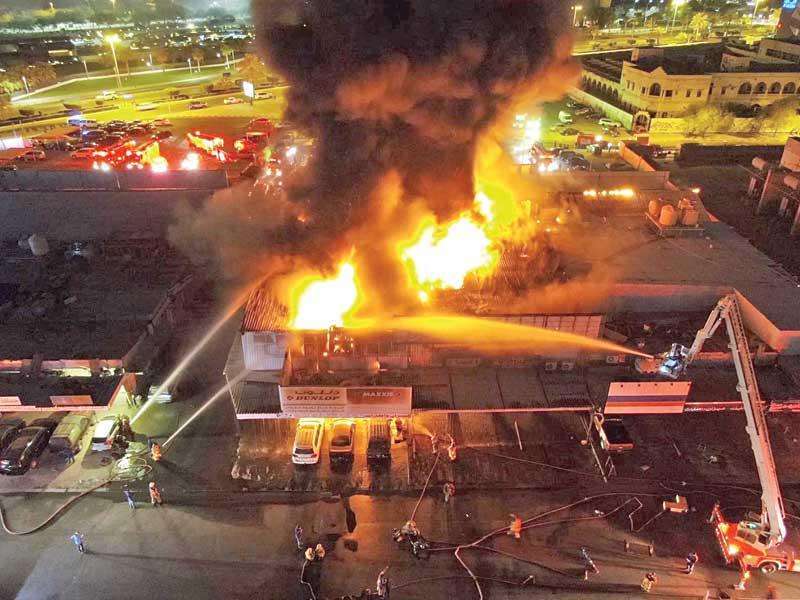 Four firefighters were injured in cases of suffocation and heat exhaustion due to a large fire that broke out at dawn yesterday in a number of jewelry stores, auto spare parts, tire sales and a garage in Al-Mirqab area, and the accident also resulted in heavy material losses to the site.

In the details, the Director of Public Relations and Information at the General Fire Department, Brigadier Khalil Al-Amir, said that the department’s operations room had received a report stating that a large fire had broken out in a number of stores in Al-Mirqab area.

Brigadier General Al-Amir added that, following the report, firefighting teams were directed from Al Hilali, Madinah, Hawalli, Ardiyah, Subhan and Al-Isnad centers, and the time it took for the first fire brigade to reach the site was within two minutes.

He added that the firefighting teams immediately began to fight the fire and the process of cordoning off the burning area was done so that the fire did not extend to the rest of the neighboring shops, as the number of shops affected by the accident reached nine stores with a total area of ​​approximately 2,500 square meters, while the teams managed to protect more than 50 vehicles, some of which were luxurious, almost to come. On fire.

Brigadier-General Al-Amir stated that the accident did not result in any casualties and the damage was limited only to materials, while monitoring the investigation of fire accidents began their work to find out the causes of the accident and came to the site alongside the firefighters, security and medical emergencies.