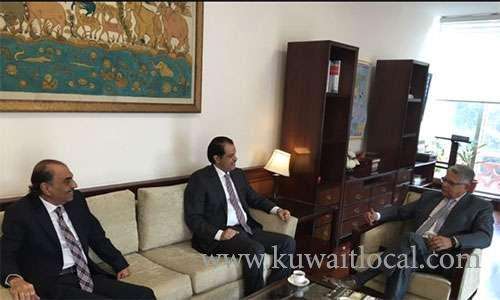 The two sides addressed cooperation in energy, air transport, and mutual trade and investment, Al-Saeed who led the Kuwaiti delegation in the consultations held Wednesday added.

In addition, they held extensive discussions on the Indian labor in Kuwait, and the latest conditions that the Indian government have put in place for recruitment.

The Kuwaiti delegation, which included Kuwait Ambassador to India Fahad Ahmad Al-Awadi, discussed the details of these conditions, Al-Saeed said, noting that the Indian side was convinced of Kuwait’s stance on the issue, and promised to look into the matter, considering the latest regulations the Kuwaiti government have implemented in order to protect the foreign laborers.

In addition, the two sides exchanged views on a number of bilateral and regional issues of common concern, focusing on the latest developments in Middle East. They also agreed to encourage the concerned authorities in both the countries to take the necessary measures to cement bilateral ties.

In the meantime, Al-Saeed on Thursday met with Secretary of Economic Relations in the Ministry of External Affairs Amar Sinha and conveyed to him greetings of Deputy Minister of Foreign Affairs Khaled Al-Jarallah.

Relations
During the meeting, Al-Saeed stressed that timetested deep-rooted bilateral relations, that are being promoted for the good of both countries.

The ceremony was held in Kuwait’s embassy in London, with a bevy of Arab and foreign academics and diplomats from the UK and the Gulf Cooperation Council (GCC) in attendance.

Moreover, Kuwait’s Ambassador to the UK Khaled Al-Duwaisan noted that 20 years have elapsed since the inception of this “highly prestigious” award, thanking Sheikh Abdullah Al-Mubarak Al-Sabah for his support. He also underscored culture and arts as an integral component that links vast religions and cultures together, adding that this ceremony is solid affirmation of close ties enjoyed by Kuwait and the UK.

Meanwhile, representative of Sheikh Abdullah Al-Mubarak said that this ceremony has proved to be instrumental in the development of relations between both nations, by bringing Middle Eastern affairs to the limelight. On the books displayed at the ceremony, he said they run the gamut from humanitarian and social studies to scientific and anthropological ones, adding that this ceremony aims to bring the Middle East and Arab world closer together.

The award for the best book of the year went to Christian Lange’s “Islamic Traditions in Hell and Paradise,” while the second best book was Bauer Karen’s “Gender Hierarchy in the Quran.” Samin Nadav’s “Of Soil or Sand” won the award for third best book.