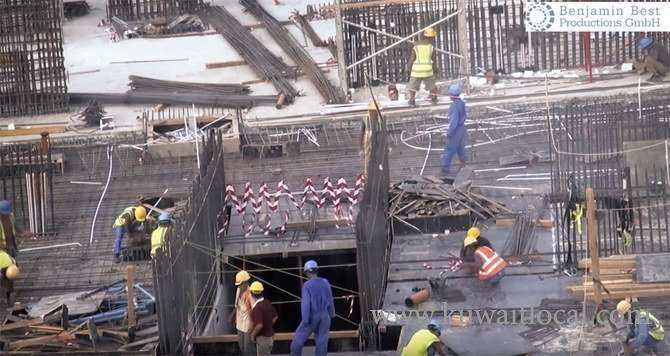 At least 1,400 migrant workers from Nepal have died while helping to build football stadiums for the 2022 FIFA World Cup in Qatar, a shock TV documentary has revealed.

Construction site accidents and squalid living conditions in the Gulf state are claiming around 110 lives every year, according to Nepali government figures.

And bereaved families of dead workers told German broadcaster WDR that they had received no compensation from Doha for their tragic losses.

WDR’s investigative documentary, titled “Trapped in Qatar,” on Friday exposed the harrowing plight of workers forced to live in crowded camps without many basic human needs.

Despite Nepal’s efforts to discourage its citizens from heading to Qatar for work, many still leave in the hope of finding better-paid jobs.

One Nepali stadia construction worker, Dil Prasad, said: “We are captured, and every day we nourish ourselves on water and bread. Without money we can’t do anything else. Month on month our situation gets worse. I’m not sure how much longer I can do it. I just want to go home. We can’t even call our families in Nepal.”

Dinesh Regimi, a Katmandu-based journalist who spent three years in Qatar as a reporter, said conditions for Nepali workers had not improved since Doha won its bid to stage the prestigious football competition almost a decade ago.

“When I was there few years ago, I saw only suffering of Nepali workers who migrated to that inhospitable country with lots of hope. They were denied a basic salary, their living conditions were very bad and there was always a long queue (of migrant workers) in the Nepali embassy in Doha seeking relief and intervention,” Regimi told Arab News.

He added: “The migrants faced difficulties returning home. Some died while working, some passed away while sleeping. The heat and living conditions claimed many lives. The Qatari government would not conduct any post-mortems on these workers.

“I can vouch for 150 deaths per year. For me it was difficult to see the pain of the workers.”

In 2017, Regimi travelled to Nepal to meet families who had lost loved ones working in Qatar.

Kishore Tamang from the Bara district of Nepal, around 250 km south of the capital Katmandu, went to Qatar in 2015 hoping to earn enough money to pay off family debts. But within a year he was dead, after being killed in a fall from a wall at a new football stadium being built for the World Cup. No compensation was paid to his family.

It was a similar story for the family of Jagat Nepali from the Nuwakot district. Within six months of arriving in Qatar he suffered a cardiac arrest brought on, his relatives said, by the intolerable heat and poor living conditions in the migrant workers’ camp.

A government official from Nepal’s Department of Immigration, told Arab News: “We are aware of the situation in Qatar and the difficulties Nepali workers face there. We try to discourage people from going to such places.”