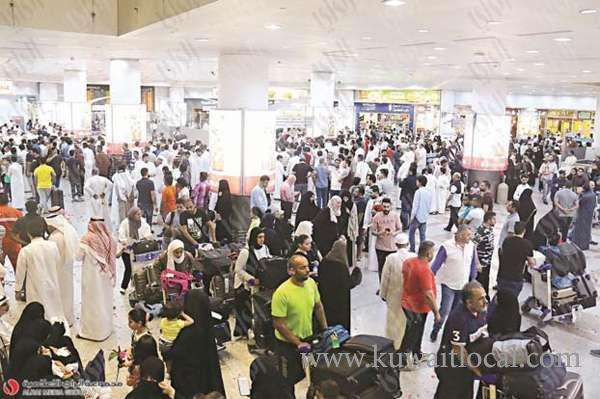 In a press statement, he affirmed that the travelers spent their holidays at several destinations, adding that the preparations at the airport for this season were at its best, as they were developed for this purpose and turned out to be successful.

Al-Fadaghi praised the great role played by Ministry of Interior in managing airport security through the efforts it put in place in coordination with the Directorate General for Civil Aviation (DGCA).

He explained that the preparations at the airport were integrated through the airport’s operating authorities from DGCA, Ministry of Interior, and other bodies which were in full preparation, as well as the supporting staff teams that were formed for this purpose.

The officials at Kuwait International Airport had prepared a plan for receiving travelers by organizing and establishing barriers for arrivals and preventing non-passengers from entering areas reserved strictly for passengers.

Al-Fadaghi revealed that there were a total of 1,740 scheduled flights at Kuwait International Airport, and the total number of passengers and arrivals were approximately 256 thousand.

He affirmed that DGCA is striving to develop and provide all services to passengers using the airport, “because Kuwait International Airport is the face of this country that connects with the other world”, adding that there will accordingly be many services in the future.

Al-Fadaghi indicated, “We are looking forward to the completion of the new airport, which will have a greater impact. It will be a world landmark compared to other international airports”.